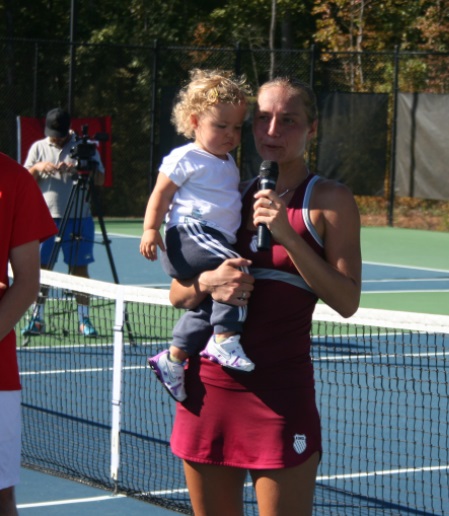 MACON, Georgia, (October 26, 2014) I know it sounds like a broken record, but chamber of commerce weather once again greeted players at Stratford Academy in Macon. Georgia for Championship Sunday at the 2014 Tennis Classic of Macon.

Actually with the thermometer hitting 85 degrees during the singles final, it was hotter than usual weather for Macon in October, but nobody was complaining.

The players weren’t complaining as a close first set, featured high quality tennis. Kateryna Bondarenko, back in tennis after giving birth to her daughter, Karin was lacing backhands down the line. Grace Min, who grew up playing many junior tournaments in Macon used her footspeed and her forehand to keep her in the set. Bondarenko had a little too much and she took the opener 6-4.

“I was broken early on and I was worried,” explained Bondarenko. “I thought I was starting the match like I did yesterday. I changed everything right away and then I got up 5-1.

Min jumped out to an early lead in the second before Bondarenko again found her range. Bondarenko was also giving a warning by the chair umpire for receiving coaching. That seemed to up the play another notch as both participants traded fierce groundstrokes and grunts in an evenly played second set. Min had her chances; a long game at 5-5 swayed back and forth for six deuces before Bondarenko closed out the set 7-5, to claim the 2014 Tennis Classic of Macon title. Her daughter, Karin ran on court to congratulate her.

“I didn’t even know if I would make it here to even play this tournament,” added Bondarenko while holding the winner’s trophy and check. “I guess it all worked out.”

For Min it is something to build on heading into the final two tournaments of the year.

“It’s good to be back in Macon. It’s probably my 15th time playing here and it’s good be be back in front of family and friends.”

Madison Brengle and Alexa Glatch may have lost their singles matches earlier in the week, but you would’ve never known that watching them play doubles.

Brengle and Glatch cruised to a 6-0 7-5 victory over the new team of Anna Tatishvili and Ashley Weinhold.

“We’ve played together a lot in the past, and we always enjoy playing with each other,” said Brengle after the match.

It was great tennis and just a great environment to be around. Thanks to the players for putting on a great show, the volunteers, the sponsors and the fans who came out all week to enjoy the professional tennis.”

This is one of the three fall events where U.S. players can earn points for the USTA’s wildcard into the first major of 2015, the Australian Open. Min takes the lead in this series.