Bryans Force Live Rubber Tennis on Sunday With a Win over Inglot/J. Murray in @DavisCup Doubles 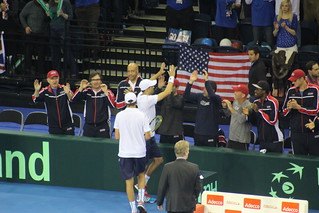 Bob and Mike Bryan ensured that the USA lived to fight another day in their World Group tie against Great Britain, as they survived a valiant fightback from the  British pairing of Jamie Murray and Dom Inglot to win 6-3 6-2 3-6 6-7 (8) 9-7. USA trail the tie 2-1 heading into the final day of the tie but will take some confidence from the way Bob and Mike held their nerve in what was a must win rubber.

Prior to this particular match Murray and Inglot had only played together as a pair over 12 years ago in junior events and their lack of experience as a team showed early on in the 1st set, with Murray especially struggling to get used to the conditions of playing with a different partner than he usually does. The Scot looked rather nervous on serve and in the 4th game of the set the Bryans were able to break the Murray serve to go 3-1 up after forcing the play and piling the pressure on the scratch  pairing. Murray and Inglot did manage to break the Bryans right back in the following game, but with the Scot continuing to struggle on serve, the outcome of the set was rather inevitable. At 4-3 up in the set a poor second serve from Murray was hit for a winner by Bob Bryan to bring up a break point for the Americans and Murray dumped a nervous volley into the net to hand the Bryans the break and a 5-3 lead. The Americans had no issues in the following game and held with ease to take the 1st set 6-3. 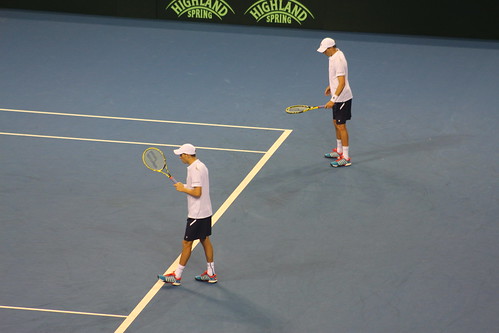 With the hopes of the USA firmly resting on the shoulders of the Bryans, they continued to show their class in the 2nd set, whilst Great Britain’s Jamie Murray continued to show his nerves. In just the 3rd game of the set the Scot squandered a 40 love lead to give the Bryans a chance to break and after a long rally Mike Bryan hit a stunning  cross court forehand pass to convert the break point and give his team a 2-1 lead in the 2nd set. The pairing of Murray and Inglot  were really struggling to get into the match and despite some good service games from Inglot the pair could do nothing of note on return. It was perhaps rather unsurprising that at 4-2 down and with Murray serving the pair once again found themselves in trouble. The Bryans forced the play once more and punished Murray for yet more week serving to break for a 5-2 lead, by this point Murray had lost all 4 of his service games in the match. Mike Bryan had the task of serving the set out for the Bryans and he had no no problems in doing so as he held to love to give his team a 2 sets to 0 lead, much to the delight of USA captain Jim Courier. 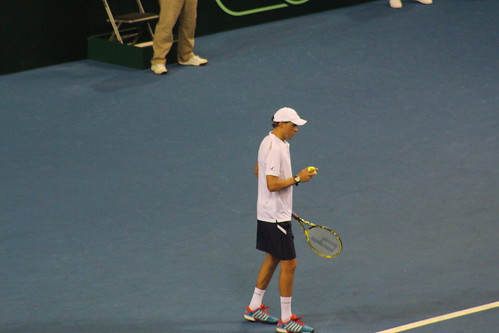 Murray and Inglot were determined not to go down without a fight and as the crowd raised their level of noise at the start of the 3rd set, the pair began to raise their level of tennis. Murray was determined to make amends for his poor serving in the 1st two sets and in the 3rd game of the set the Scot comfortably hold his serve to 15 to give Britain a 2-1 lead in the set. The game that followed was an thrilling one with both teams producing some stunning Tennis which had the Glasgow crowd on their feet multiple times. Two break points came and went for the British team but after saving four game points points of the Bryans, they found themselves with another break point and at the 3rd time of asking the Brits converted to take a 3-1 lead in the 3rd set. Inglot had been holding serve with relative ease throughout the match and another convincing hold from the man nicknamed ‘Dom the Bomb’ quickly extended the Brits lead to 4-1 in the set. The rest of the set flew by rather quickly with none of the four players on court experiencing any struggle on their serve. Dom Inglot served the set out to 15 to take the 3rd set 6-3 for the Brits. 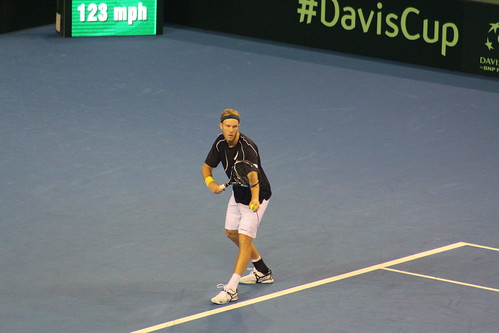 After starting the match extremely slowly, Murray and Inglot now seemed like a pair who’d been playing together as a team for years and their confidence just seemed to grow even more in the 4th set. The pair were able to save a break point against their serve early on in the set and they even had two opportunities to break a couple of games later, but the Bryans held firm and quashed both of the Brits chances rather comfortably. The Brits were forced to serve to stay in the match twice and despite experiencing some slight trouble on his serve at 6-5 down, Jamie Murray was able to hold and send the 4th set into a tiebreaker. 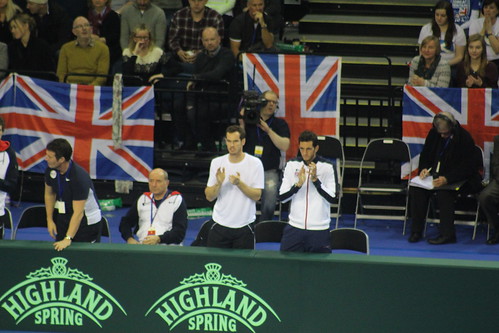 In that 4th set tiebreak, both teams held their nerve on serve until the 2-3 service point, as the Bryans went up a minibreak by winning a point off of Jamie Murray’s serve to go up 4-2, and put themselves three points away from clinching the rubber. However, team GB would fight back as the partisan crowd never lost hope , Inglot finished a volley at the net between the two Americans to prevent them from earning a match point, and then won the 4-5 point for 5-5 entirely by himself, with a strong serve and two quality volleys. The Bryans netted to go down 5-6 in the fourth set breaker. The Bryans did get it back to 6 all, but again Inglot was clutch, skying for an overhead volley to give GB a minibreak and a set point at 7-6. To the chagrin of the crowd, the British team again failed to convert, and team USA won the next point also for a match point at 8-7 on Bob Bryan’s serve. Bob Bryan slipped when faced with Inglot’s curving stab return and the match point was saved to push the tiebreak to an agonizing 8 all. After Inglot had done most of the damage for team GB in the tiebreak, it was Jamie Murray who forced the third set point at 9-8 as his forehand return just found the edge of the outside doubles line. Team GB finally forced a fifth with a volley winner by Murray sending the crowd into a frenzy. 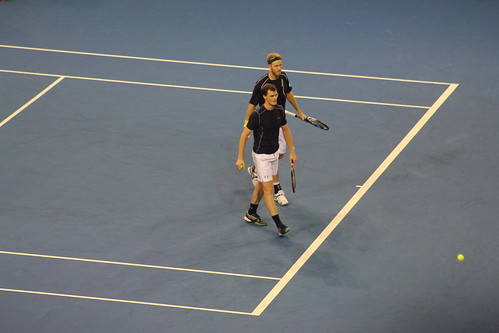 In that deciding fifth set, the Americans got a half chance at 1-1, as they went up 0-30 on Murray’s serve but Murray and his teammate would claw back and win five of the next six points to go up 2-1. Both teams would hold serve all the way to 7-7, as there were no break point chances to be had with quality serving by both teams. At 7 all, team GB went up 40-15, but collapsed from there, as Inglot netted a chest volley for 40-30, .whiffed on an overhead for deuce and netted another volley to generate a break point chance for the Americans. They broke for 8-7 as Murray netted a forehand volley. In that 8-7 game, the Bryans won four consecutive points from 0-15, and on the match point the British team sent the ball long. The Bryans finished with their trademark chestbump, knowing they had kept the tie alive for team USA. 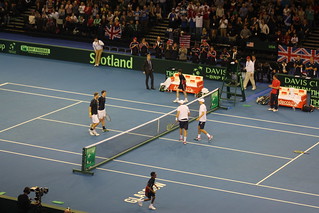 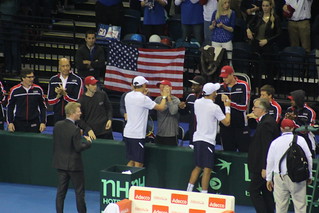