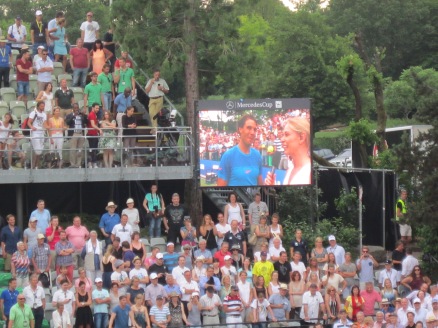 Seventh day of this year’s ATP Stuttgart and it was at the beginning a very hot day. Later on it got very cloudy and bad weather arrived in Stuttgart. It rained at about one hour and the match between Groth and Troicki had to be moved to the Mercedes Court which is not televised. The rain delay didn’t change anything as just three matches were played. Before those two matches Nadal played against Tomic in the Center Court and won deservedly in three sets.

Gael Monfils had the right keys to beat Philipp Kohlschreiber who was not looking sharp against Frenchman. Monfils broke in the first game, only to get broken back. Monfils broke his serve again at five all, as Monfils changed his return position. His balls were really long and sliced and Kohlschreiber’s slices went many times today into net. He also couldn’t bring the power to extort Monfils during rallies. Monfils anticipated very well and could read Kohli’s weak serves. Monfils served out the set out after his break, the rhythm of Le Monf bothering Kohli. In the second set Kohlschreiber served well again and Monfils let the German’s service games slide. Monfils couldn’t find his focus anymore and started to commit many unforced errors. Kohlschreiber benefited from these and could break very early in the second set with some beautiful forehand winners. Monfils shots became short and Kohli consolidated the break.

Monfils couldn’t gain a foothold anymore in this set and Kohlschreiber stayed focused to not lose his serve. Monfils had three break points again as the Bavarian served for the set. The Frenchman lost these break points just a bit too easily, played too risky and had the wrong shot selection. For example: At set point he played an unnecessary and failed half volley, though he was almost at the net. Over and above his down-the-line shots didn’t reach the lines they used to. He wasn’t moving well the whole second and the beginning of the third set.

He slipped many times, hurt himself and Kohlschreiber couldn’t level up his return game, when Monfils had signs of almost giving up the match. After the first three games in the deciding set Monfils had to take a medical time out, Kohlschreiber lost his rhythm due to this. Monfils was passive during this service game and just waited for the unforced errors the German many times committed. With the break in the bag Monfils served the match out, without any problems. Kohlschreiber’s  backhand slice doesn’t work with Monfils who loves to return them with the power and strength he has. Monfils defeats Kohlschreiber 7-5, 3-6, 6-3.

Monfils’ next opponent Rafael Nadal had problems too in the second set. He could have easily closed the match out in two, but he fiailed to pressure Bernard Tomic, who moved poorly today, on serve. In the first set, Tomic had few chances to break as Nadal was strong on both wings. Though the Australian hit some jaw dropping winners, he didn’t have the consistency to put pressure on Nadal, who swung freely. In the second set Tomic started poorly with an opening game break. Tomic appeared to be behind the ball timing was and lacked aggression. Nadal moved better, hit some great returns. Most of all Nadal served unbelievably with 14 aces and many more nonreturnable serves. Still, Nadal got immediately re-broken, as he was too inattentive for a few seconds and Tomic didn’t waste his opportunities to hit the winners for the break. Though he was in the match again, he had more problems holding his serve than Nadal. 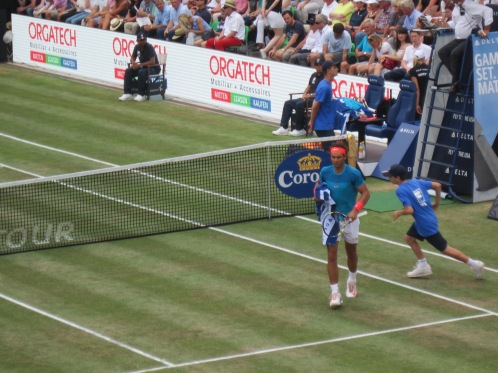 Tomic didn’t change anything to make the match more exciting at this point, just hoped to not get broken. The second set would go to an eventual tiebreak with ease. As the breaker started, bad weather approached and it got very cloudy, you couldn’t see the sun anymore. Leading with a mini-break Nadal kept the balls longer in play to attack Tomic’s groundstroke flaws, but after another long rally Tomic hit this unbelievable forehand down-the-line winner as Nadal was at the net to get the mini-break back. Both serving very well until 6 all Tomic hit another unreturnable serve to get his first set point. Nadal felt the pressure he was in at this point, double faulting to gift Tommic the set. In the third set Nadal established his serve and the in Stuttgart born Australian still had his flaws during the rallies. Nadal played his forehand down-the-line winner to get the break point, he converted with a good forehand, and Tomic just committed another backhand UE. The Spaniard served it then out and didn’t have any problems holding his serves, Tomic lost 4-6, 7-6(6), 6-3.

After Nadal’s match it suddenly began to rain, so we had a rain delay of about an hour. Organizers realized they couldn’t play two matches on the Centre Court, so they moved the match between Viktor Troicki and Sam Groth It was a competitive match, with Troicki finding success attacking Groth’s backhand. Both played a fantastic Serve and Volley and both faced two break points they couldn’t convert due to strong serving by their rivals. Troicki stood more behind the baseline than Groth and was overall a better returner, whereas Groth served better than the Serb. In the breaker the baseline game decided the outcome of the match, Troicki returned really good and dictated the rallies, Groth struggled when blocked from approaching the net. After quality deep shots, Troicki forced Groth in successive volley errors. Troicki converted his first set point on his serve thanks to his great Serve-and-Volley and a smash winner after a bad lob return. The second set went byquickly, Groth couldn’t gain a foothold in the match and got broken two times, as Troicki returned to the line and very long. The Australian’s one dimensionality had been exploited and he didn’t have any clue how to change it. Troicki with very good returns and very good serves held to defeat the serve-and-volleyer Groth 7-6(3), 6-1.

Troicki will face Marin Cilic who after an abysmal start could turn the match over in two tiebreaks against an in-form Mischa Zverev. The German profited from a rusty start by the Croat who committed many unforced errors. By the time he started to serve better and to hit his auspicious forehand shots in the second set. Zverev stood many meters behind the baseline, and couldn’t manage to get many break opportunities and to break him. Though he played a great baseline game and Cilic had many problems with his serve, at the end Cilic served too strong and Zverev couldn’t handle this in the second set. A double fault decided the first tiebreaker to the advantage of Cilic. Cilic got suddenly nervous too and couldn’t hold his serve as Zverev notched up his performance and with the crowd behind him.

Both servers could hold their nerves and their service games until the second breaker. Cilic once again played very clutch in the breaker and hit a return winner on the line, as Zverev moved forward to the net. Cilic lost his match point on his serve and Marin just had one more in the breaker. Zverev served and volleyed, but Marin hit an unbelievable lob winner touching the base line. Cilic won the match and defeated a very strong Mischa Zverev in three 4-6, 7-6(5), 7-6(5).