Hollywood subjects us year after year to a never-ending amount of baseball, boxing or football movies, every one with pretty much the same struggle and the same conflict. Yet the film industry has yet to give us anything close to resembling a decent tennis movie. The first place they should look is the story of Dustin Brown, who on July 2, 2015 had his amazing story reach its pinnacle on the most cherished tennis court on the globe.

Those of us who follow the lower levels of the ATP tour have known about Dustin Brown for many years now. The storybook tale of him traveling obscure tournaments in Europe while lining in an RV camper to save money, stringing rackets for other pro players for 5 euros a pop, his trouble with the Jamaican tennis federation which led to his change to Germany and his love for doubles, playing with a variety of partners in pretty much every tournament he played in. We have known about his eclectic eye-catching style of play, where whether it is through the court or to the fence, the ball is always in some way whizzing past his opponent. And those of us that have followed him have always known that he was capable of great play, especially on grass courts.

But despite this story and the exciting game, for a long time it seemed as if Dustin Brown would never truly have his one special moment to announce himself to the tennis world. Sure he had had semi big results before, beating Lleyton Hewitt in Wimbledon in 2013 and beating Rafa Nadal at Halle in 2014 just days after Rafa claimed his 9th Roland Garros title. But on July 2, 2015 the German-Jamaican tennis Talisman created his moment; the moment that had been building for years. Sometimes in sport all an athlete can ask for is one moment and whether or not they take that moment is entirely up to them.

So once the off-speed out wide ace went past tennis legend Rafa Nadal on Wimbledon Centre Court on July 2, 2015 and the Talisman dropped his racquet in part disbelief and part joy, what exactly was going through his head? What created this moment? The 6-3 6-2 loss to Adam Pavlasek this year in a challenger, just one of many head-scratching losses that have always been the bane of Brown’s tennis career? Playing in Jamaican futures as a young man with a dream? Or was it the time at Chris Evert’s academy where he was from all accounts the wildest player there and the one who people thought would never have the discipline to achieve anything big? All of these and more were simple hardships in the life of Brown all of which stitched together eventually and created the moment that he would either take or the moment he would let slip.
Classic sports movies almost always end with the hero seizing the moment in a glorious fashion. In Wimbledon’s movie, Dustin Brown seized his moment in spectacular fashion and provided us fans with an amazing validation of why we love the underdog and why sometimes the most amazing things are single moments in single matches. 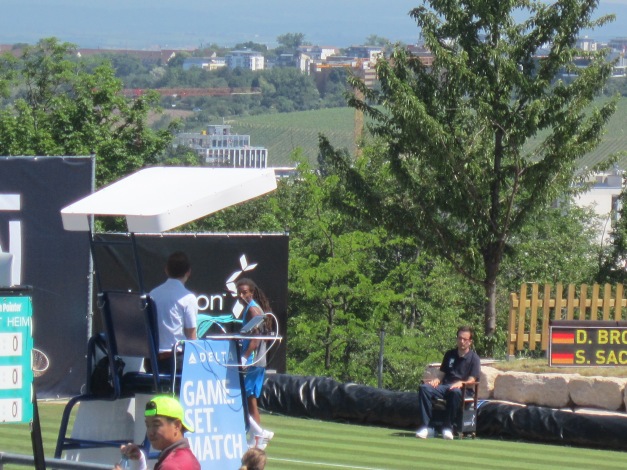 Maybe the best part of this ride is still yet to come, Brown has an open draw now that he could take advantage of, but it would also be just as likely for him to fall next round. But even if he does fall in round 3 to Viktor Troicki, one thing that we can 100% certain of, is that Dreddy will be Dreddy as he always has been and that on July 2,2015 on the same court where legends old and new have lived and died, the Talisman made his own moment something special.