Top seed Pablo Carreno Busta was handed a very tricky opening round against Florian Mayer, but he survived, even though it wasn’t easy with a 2-6 6-2 6-4 scoreline. His next match, against Rogerio Dutra Silva, was similarly tough, with Carreno Busta winning 6-3 1-6 6-4. His run ended in the next round, however, as Filip Krajinovic was too strong in the third set this time around, 7-5 4-6 6-3. Krajinovic faced the in-form Taro Daniel in the semi-final, who took out fifth seed Damir Dzumhur in the second round, 6-4 3-6 6-3. Krajinovic came through with relative ease, 7-5 6-2. In the bottom half Paul-Henri Mathieu was cruising through the draw, only dropping thirteen games on his way to the final, although his quarterfinal match against Nils Langer ended in a walk-over due to the German’s back injury. In the semi-final Mathieu ousted Thiemo de Bakker 6-3 6-3. Krajinovic clearly was too strong in the final, however, beating Mathieu 6-2 6-4 to claim his third Challenger title. It also meant a huge ranking boost, rising thirty-five spots to #87, nearing his career high ranking of #86. Mathieu only rose three spots to #124, as he equalled his result of last year. 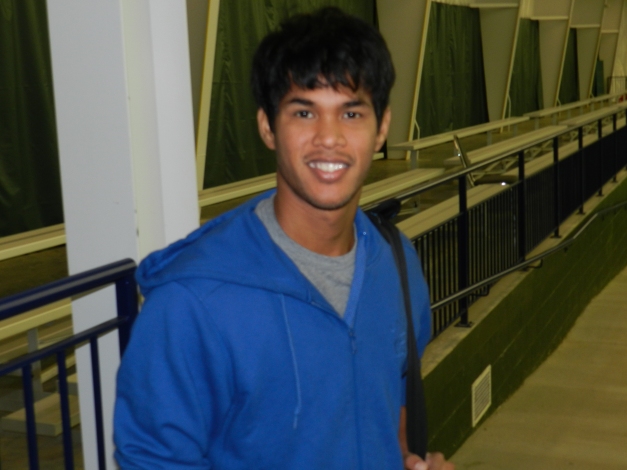 Disaster struck for top seed Tatsuma Ito, getting ousted by qualifier Nicolas Meister in the first round, 1-6 6-2 6-4. It took seventh seed Somdev Devvarman to take out Meister in the quarterfinal, 7-6(4) 4-6 6-2. Devvarman faced Ryan Harrison in the semi-final, who took out Frank Dancevic 6-7(2) 7-5 7-6(5) in the second round, but not before the Canadian won the point of the tournament:

Devvarman had no problems with Harrison, easily beating him 6-0 6-4. In the bottom half there wasn’t a seed left after the second round, with #8 Connor Smith losing in the first round, while #2 Iliya Marchenko and #4 Austin Krajicek both lost in the second round. #6 Yuichi Sugita withdrew late, leaving a qualifier to take his spot. Daniel Nguyen was the one who took advantage of the chaos, advancing to the final after a 6-2 6-4 win over Adrien Bossel. The final was an absolutely spectacular one, with Devvarman eventually winning 7-5 4-6 7-6(5) to win his fifth Challenger title. Taking three hours and thirty-one minutes, the match became the longest final in Challenger Tour history. He rose twenty-five ranking spots to #148. Nguyen rose forty spots to a career high ranking of #189, cracking the top 200 for the first time.

Another shocker of a tournament when it comes to the seeds, except for one. Nicolas Kicker, the last direct entrant, was responsible for taking out two of them, #2 Dusan Lajovic in the first round and #6 Alejandro Gonzalez in the quarterfinal, who was the second to last seed standing at that point. Kicker also beat qualifier Matteo Donati in the semi-final, 7-6(3) 6-4, to make his surprise run complete. In the top half top seed Aljaz Bedene was the only seed to firmly stand his ground, getting through to the final after a 7-6(3) 6-3 win over Marco Cecchinato. In the final against Kicker he continued his dominance, beating the Argentine 7-6(3) 6-4 to claim his eleventh Challenger title and a new career high ranking of #70, rising five spots. Kicker reached a career high ranking as well, rising twenty-eight spots to #176.