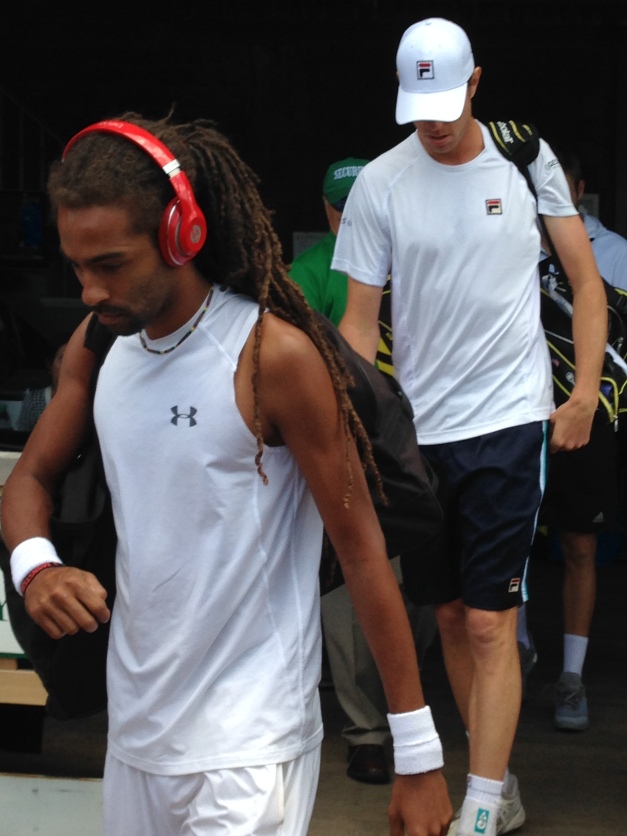 Today in Newport, Dustin Brown won yesterday’s suspended second round match against Sam Querrey. For once, a match was over as quickly as expected. It was over less than 10 minutes after it started, as Brown held serve twice to head to the quarterfinals.

He indicated that he didn’t stay up all night thinking about the timing of the thunderstorms that caused him to pause en route to victory.

Asked about his new celebrity status, he stated “When you’re at a tournament, with my looks and my hair, it’s hard for me to hide. I wouldn’t necessarily call it celebrity status. I can still go to the supermarket without someone jumping me”.

Adrian Mannarino jumped on Rajeev Ram early but Ram pounced late. In a match that lasted two hours and thirty minutes, Ram scalped a seeded player for the second time this week by winning the second and third set tiebreaks. He’s reached the semis for the third time here, and he saved match points against both Isner and Mannarino. He actually won this tournament as a lucky loser in 2009.

With their first ATP World Tour semifinal berth on the line for both players, Tatsuma Ito and John-Patrick Smith were expected to have a little case of the nerves. Ito sure didn’t look that way before the match, cool and composed and inviting me to take a photo, something that usually only irritates the pros pre-match. But that didn’t translate to an easy start for Ito. Ito calmed down and took the second in a tiebreak, but Smith broke him in the third and sailed away 6-3, 6-7(2), 6-3.

Tomorrow’s semifinal action includes Jack Sock against Jan Hernych and Ivo Karlovic takes on Dustin Brown. This is my last post from the tournament as I will be heading to the Islands tomorrow. Well, Block Island. See you in DC at Citi Open!