Sitting in the player’s lounge at the Las Vegas Open Challenger, I look to the other side of the room and see a coach gripping his players racquets before the match. I turn to my doubles partner and quietly say, “must be nice.”

It’s no secret that it’s impossible to turn a yearly profit playing in the minor leagues of tennis, due to the peanut-sized prize money and high expenses. Just to give you an idea, if a player wins the singles AND doubles event at the futures level, he’s unable to cover his expenses. At the challenger level, expenses can be covered, but only if a player wins the singles tournament or reaches the final.

With that being said, in the attempt to cut our losses, we rarely travel with a coach. This is because unlike in team sports, a player is required to cover his coach’s salary and expenses on the road. So by choosing to travel alone, a player saves a boatload of money. 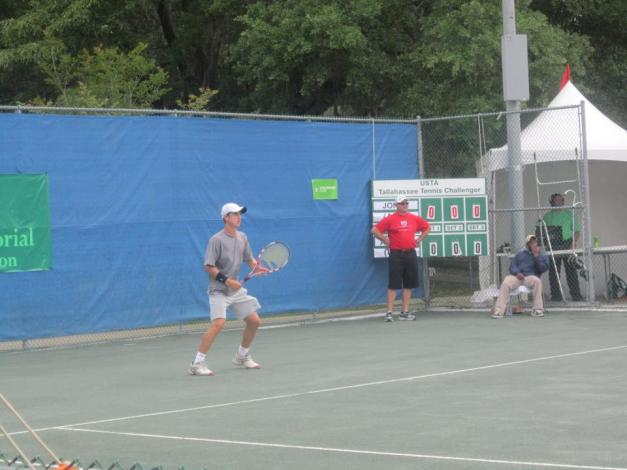 While it’s great to save all that money, traveling alone means getting rid of the most important contributor to a player’s success. Coaches provide players with the information they need. They correct a player’s bad habits, techniques, and strategies that have prevented them from reaching the top. So when a player travels with a coach, he continues to receive the necessary information to improve daily.

For a player traveling alone, the probability of daily improvements decreases. A player might be smart enough to recognize some of his mistakes but he can’t recognize all of them. It is the job of the coach to first inform the player that he’s making a mistake. Then the player can begin to correct it.

When a player traveling without a coach does recognize a mistake, he then has to figure out how to correct it on his own. For example, if I finally figured out that I’m hitting low short forehands incorrectly – would I then ask a fellow competitor to feed me short balls for an hour so I can correct the issue? Probably not. He could be a potential opponent. I don’t want to expose a weakness to him.

Well what if I don’t care about exposing my weakness, and I just want to get better. Will a potential opponent be willing to spend an hour of their day, helping me for free, when they could be spending it improving their own game? Not likely. And I can’t blame them. I wouldn’t want to either. If I’ve practiced for two hours and have a match the following day, I’m not going to spend an extra hour preparing someone else for their match when I could be preparing for myself.

Because of these circumstances, the player traveling with his coach has a higher probability of success over the player who travels alone. And I’m referring to a player’s overall career, not just an individual tournament.

Think about how much time is lost for the player traveling to the average 27 tournaments a year alone. That’s more than half the year that he didn’t receive any coaching.

Compare that to the player always traveling with a coach.

A player traveling with a coach to those 27 tournaments, will receive coaching for an extra 189 days a year. Over 5 years that equates to 945 days of extra coaching received. Over 10 years that’s 1,890 days!

It’s easy to see how big of an advantage a player who has the ability to travel with a coach has over one who’s forced to make it on his own. The players I’ve seen make the quickest jumps from the minor leagues to the ATP level have had a coach with them all the way.

The question becomes, what does a player do if they don’t have the finances to travel with a coach? Does he stop playing, knowing that the odds of him making it as a top 100 singles player in the world are stacked against him? Lets not forget that tennis is already one of the most difficult sports in the world to make it in. Or does he try anyway, believing that he can be the exception and live his dream of playing in a grand slam?