I don’t get out to see junior tennis very often, but that’s okay, since the US Junior Circuit was kind enough to come to the Charlottesville Challenger and put on a clinic today. 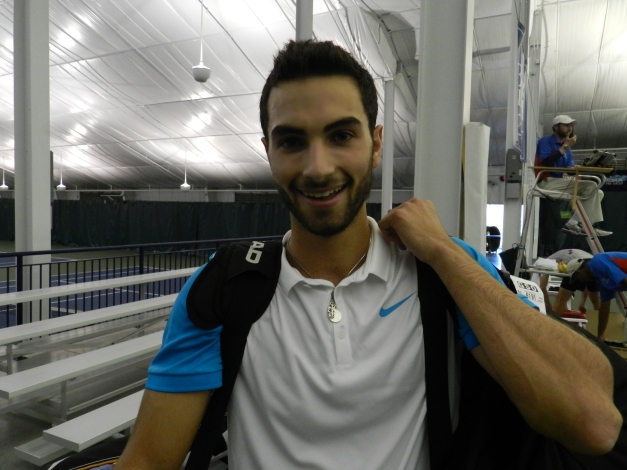 Fellow teen Tommy Paul cruised past a noticeably irritated Chase Buchanan after grinding out three razor-thin games in the first 24 minutes of the match. The other 15 games of the match flew by in 57 minutes with a 6-2, 6-4 result.

Then, Jared Donaldson, showing poise beyond his 19 years, closed out a close one against 28-year-old Marek Michalika 7-6(4), 6-4 in 2:03. I last saw Donaldson play in a loss at Newport, and he was more miserable and self-loathing that day than almost anyone I’d ever seen on court. Today, he publicly chastised himself in the first set but was cool and composed in the second. Each of the sets were nail-biters, but his rising maturity level helped him stay with it. Donaldson said, “I think I’m still learning a lot and I think it’s important to have those tricky situations. After the challengers in California, my coach told me, ‘you need these tricky matches to draw on them and remember how you acted’.” On his emotions, Donaldson said, “Sometimes I think I’m a little bit too up and down. I think it’s a step in the right direction, but I have a long way to go.”

As Jonathan Kelley said on twitter, it’s still early in the day. The U.S. will add at least one more teen to the 2nd round and maybe two, as Colin Altimirano faces Stefan Kozlov and Frances Tiafoe takes on top seed Malek Jaziri this evening.

4 American teens into the Round of 16 with at least 1 more joining them (Kozlov or Altamirano). Feels like KZoo 2014 https://t.co/tMjb3oCPh5