Preparations for the Australian Open are now complete after Svetlana Kuznetsova and Alize Cornet claimed titles in Sydney and Hobart.

With many top players taking part, Monica Puig vs Kuznetsova was not the final anyone expected pre tournament. Both played fantastically well to get to the final, but only one carried that form over.

“It’s great. I mean, honestly, I didn’t expect this, but I’ve also never gone into a tournament thinking about winning, never even once,” Kuznetsova said after the match.

“I just went out there and performed, and everything went my way. Now I just want to keep focused for the Australian Open.”

It was quite the effort given the marathon against the top seed just hours before. This is Kuznetsova’s 16th WTA title, two of which are Grand Slams.

“Actually somebody asked me before the match, the supervisor, ‘How do you feel?’ Everybody probably thinks because I’m 30 that I’m really old and need to pick myself up. But I felt great. I felt better than most days here. First matches of the year you’re sore, but after you get going, it’s great.”

It was still a wonderful week for Puig who made her first Premier final this week.

“There wasn’t really too much I could do. I definitely ran around the court and tried to get every single ball I could back, but the only answer I have today is that she was the better player,” Puig commented.

“I had an incredible week coming through qualifying, my first time here in Sydney, and I made my first final of a Premier tournament. Overall it was a very good week and I’m very happy about it.

“I’m really not going to get disheartened about this final. She just played unbelievable.” 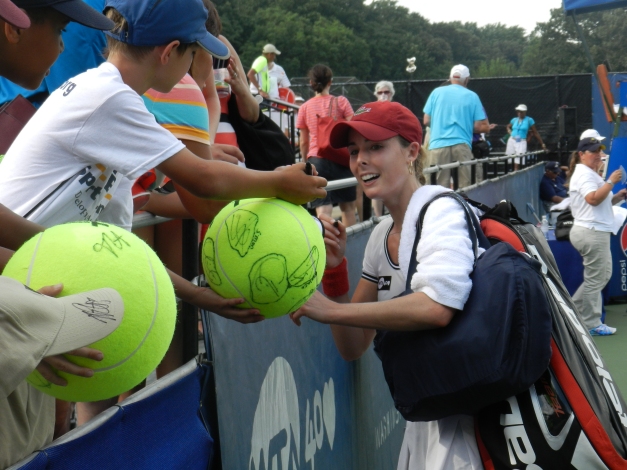 Meanwhile in Hobart, Cornet eased to victory over Eugenie Bouchard to claim her first title in nearly two years. The Frenchwoman only dropped three games as she destroyed the Canadian 6-1, 6-2 in just over an hour.

“I was very focused for the whole tournament and the whole match today, and now I can let go!” Cornet told press after the match. “To start the year this way, it’s the best.”

Cornet broke the Bouchard serve seven times in the match and claimed her first victory over her opponent. Bouchard had won their previous two meetings.

“Each time we’ve played against each other, it was a tough battle and at least two hours, three sets or two tight sets.” Cornet added.

“This time, I was just a little bit better from the beginning of the match. I was patient, trying to be aggressive but trying to play the right shot at the right time. It all worked out my way today, and it’s just great to have an easy final like this because finals are already so emotional