Top four seeds who receive a first round Bye

A fairly strong line up for a Premier 470 event. 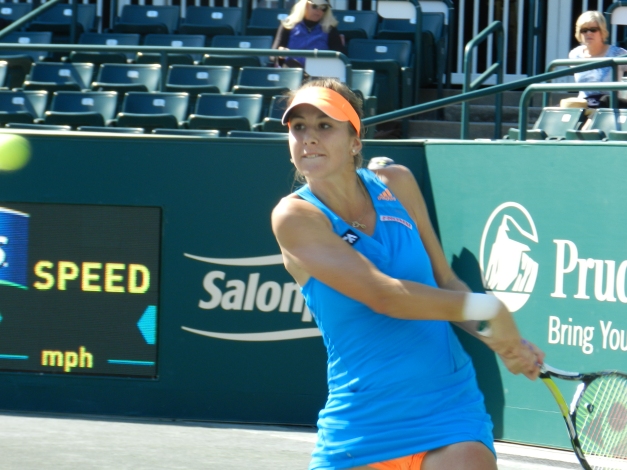 Belinda Bencic vs Caroline Wozniacki: Bencic continues her comeback from injury by entering the Toray Pan Pacific Open. The Swiss lost a lot of points over the summer and is unseeded for this event, but despite that she has still been drawn against another unseeded player in former world number 1 Caroline Wozniacki. The Dane has looked like a shadow of her former self this year, but she hit form in a semi final run at the US Open.

These two players previously met here last year with Bencic prevailing in straight sets. As a matter of fact, the 19-year-old has proven to be quite the match-up issue as she has won their past four meetings.

Neither player possesses the greatest firepower, so expect long rallies. Wozniacki will retrieve and retrieve as usual, but there will be question marks on Bencic’s fitness and form.

(6) Dominika Cibulkova vs Lucie Safarova: Cibulkova has the misfortune of drawing one of the more dangerous unseeded players in the draw with Safarova being her opening round opponent.

The head to head reads 4-2 in the Czech’s favour, but this is a match-up that can go either way. Both can hit with a fair amount of power and it will likely come down to form on the day.

Top Half: Muguruza heads into Tokyo as the top seed in a desperate search of  finding form. The Spaniard has struggled since winning the French Open and has lots of points to defend in the fall. She may open up in the second round against the woman who put her out of the US open, Anastasija Sevastova. The Latvian is full of confidence in her career resurgence and will give Muguruza a tough test again. Anastasia Pavlyuchenkova is the other seed in this section, and as always she will be a dangerous player. The Russian struggles with her consistency, but when on form she can go deep in any tournament. She will face Andrea Petkovic in the opening round, a player that has struggled to find form this year. Elina Svitolina or CoCo Vandeweghe will await in the second round. Both players are fairly hyped youngsters who have yet to live up to their potential and possess different styles. On a quicker court you would favour the American, but Svitolina is the more consistent of the two. The winner of that second round match may fancy their chances to make the final four with Muguruza’s lack of form.

A player most certainly full of confidence is Pliskova. The Czech won Cincinnati and then went all the way to the final of the US Open. With them results behind her, Pliskova may be the title favourite here. Yanina Wickmayer or a qualifier will entertain her in round two, then it could possibly be Cibulkova or Safarova in the quarter finals. The winner of that match will face a Japanese player in round two in the form of Naomi Osaka or Misaki Doi. Pliskova will be favourite to make it out of this quarter, but Cibulkova and Safarova are very dangerous players capable of causing an upset.

Bottom half: Suarez Navarro, still the ever-present, headlines the third quarter as the fourth seed, but the Spaniard has a very tough draw ahead. Bencic or Wozniacki will await in round two and then it is possibly Madison Keys in the quarter finals- don’t be shocked to see an early exit for Suarez Navarro. The American faces Yulia Putintseva in round one, which is no easy task. Keys, despite being the lesser seed, will be favourite to make it out of this quarter, but you never know which Keys will show up.

Radwanska is back to defend the title she won last year by defeating Bencic in the final. The Pole is looking to seal her spot in the season ending championships in the upcoming weeks, starting by defending her Tokyo crown.  It won’t be easy with the crafty and feisty Barbora Strycova a possible round two opponent. Petra Kvitova, who has slumped out of the top 10 this season, took a wildcard into this event and is the projected quarter-final opponent.  The Czech’s lack of form means she could be upended by Monica Puig in the second round.

The reigning champion will likely defend her title here. Pliskova’s good form will carry her to the final, but Radwanska’s craft might be too much in the final.