The other ATP 500 tournament this week takes place in Vienna, Austria where World Tour finals contenders Dominic Thiem and Tomas Berdych are competing in the Race for London and Andy Murray continues his push for year end world #1. Here is a preview with predictions. 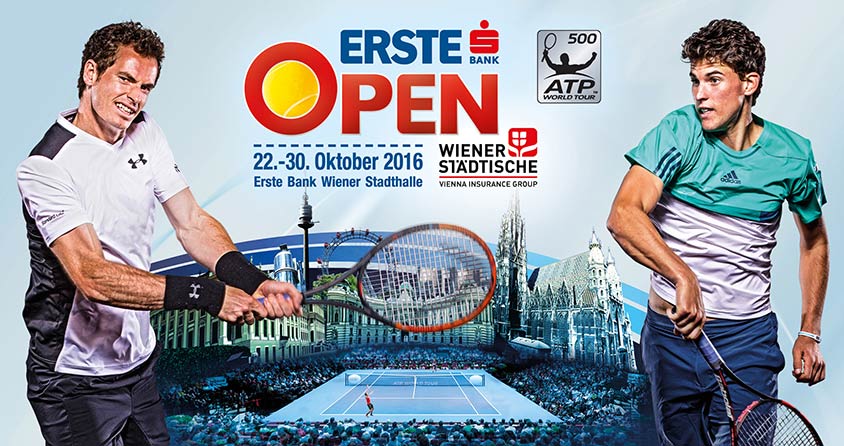 John Isner has lost three straight matches while Struff is 9-1 in his last 10 matches and plays his best indoors. Isner is the established veteran in this matchup, but I’m picking Struff to nip him in an upset. Isner has looked out of sorts this Fall and ready for the season to be over.

Pouille has been outplaying Lopez in recent weeks, and the young gun should defeat the serve and volleying veteran in this matchup. I’d expect it to be full of exciting shotmaking.

Ferrer has lost three straight, and one of those losses came against Edmund, who upset him in Antwerp and reached the semifinals last week. The Brit is rising, while Ferrer has been slumping mightily this season. Edmund should be the pick to win their second straight matchup.

Johnson leads the h2h with Karlovic 3-2, but Dr. Ivo should even that up if he can just play at his normal level. Johnson has been struggling late in the season, while Karlovic continues to defy his advanced age and compete at the highest ATP level.

Andy Murray can win his 11th straight match if he can hand Martin Klizan a sixth straight loss. Murray will face Gilles Simon in round 2, presuming Simon eases past a struggling Guillermo Garcia-Lopez for a seventh straight time. Simon is a tough opponent, but if Murray keeps up his good form he should reach the quarterfinals. Murray over Pouille is my pick in the quarters, Pouille should beat Lopez and Struff/Isner to reach the quarters.

Young guns Dominic Thiem and Kyle Edmund look set to face off in the quarters. Thiem was a finalist in Metz and is the home hero for this tournament. He’ll need to defeat countryman Gerald Melzer, and Kevin Anderson or Viktor Troicki to reach the quarters. Despite Anderson’s big serve causing Thiem some problems, he should prevail and reach the quarters. Thiem would love to lock down his spot in London, as he’d currently be the 7th player qualified, and a win over Edmund in the quarters would almost assure that. Edmund faces Joao Sousa or Pablo Cuevas, both of whom are struggling, in round 2, after Ferrer.

Tomas Berdych would be the last player into the World Tour finals if the season ended today. He’s lost two straight matches entering Vienna and needs wins over Nikolosz Basilashvili, and Andreas Seppi or Karen Khachanov to get some momentum and reach the quarterfinals. Seppi comes off semis in Antwerp while Khachanov recently won his first ATP title. Both could trouble Berdych, but he should be able to build momentum as the #2 seed.

Well known ATP players Jo-Wilfried Tsonga and Roberto Bautista Agut should battle each other in the quarterfinals. Tsonga has been in above average form and opens with Benjamin Becker, a fringe veteran. RBA has Austria’s Jurgen Melzer, who will be seeking a huge upset at home, with Moscow finalist Fabio Fognini likely to follow. Fognini beat his round 1 opponent Albert Ramos in Moscow. Tsonga over RBA is my pick in the quarters, Tsonga should beat Philipp Kohlschreiber or Stephane Robert in round 2, and RBA may be slightly more fatigued by the time they reach the quarters, despite RBA’s win in Shanghai, Tsonga should be slightly better. Both Kohli and Robert reached ATP semifinals last week in Moscow and are in good form.

When healthy Kohlschreiber is better than his current ranking, and after reaching the semis in Moscow the German could catch Tsonga in a lull, and also defeat Bautista Agut to reach the semifinals. With Karlovic or Berdych likely to come out of the bottom half, finals are also a possibility for Peppo.

Murray and Tsonga should be the favorites to reach the final, they aren’t locks, but they have the clearest path. Look for Murray to end home hopes for Thiem in the semifinals.

Murray is the best player in this draw, he demonstrated his challenge for #1 in Asia, and that should continue in Vienna, and next week in Paris.