The final full field tournament of 2016 takes place in Paris as the 2016 season is coming to an end. Here is a look at the field with predictions as players look to shore up their year end rankings and build momentum for next year. 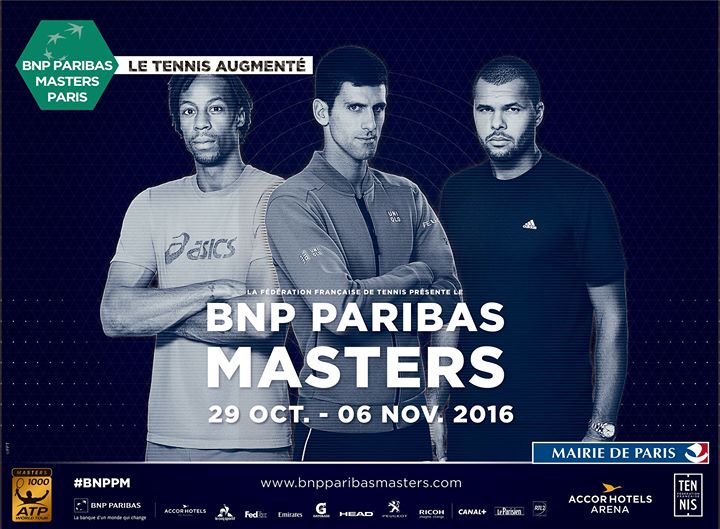 Isner has a h2h win over Zverev indoors, but he’s been struggling while Mischa has been coming on strong. The German reached the quarters in Shanghai and the semis in Basel, stunning Stan Wawrinka at his home tournament. He also posted quarterfinals in Shenzen this fall and looks set to be an ATP regular with his serve and volley game next season. Isner has just two wins since the US Open, and I predict Zverev will ease past the big serving American.

Kohlschreiber is 3-2 in has last two outings, while Sock is 8-3 in his last three outings. Both players have shotmaking ability, and Sock’s forehand should win the day against the veteran German.

PCB beat Fognini in a three set Moscow final and looks to be in good form. Fognini has his shot at revenge, but the Spaniard is the favorite.

Benneteau has four career wins against Simon, while his French counterpart has five. In Paris these veterans will entertain the crowd as Simon has been in solid form, while Benneteau qualified and has been improving since returning from injury. Simon is the favorite, but Benny could pull an upset.

Basel semifinalist Gilles Muller should beat Nicolas Almagro to setup a match with the world #1 Djokovic, who is fighting to hang onto his year end world #1 ranking. Novak should face Grigor Dimitrov in round 3, presuming Dimitrov beats a struggling Marcos Baghdatis or Paul-Henri Mathieu. Dimitrov isn’t playing well enough to beat Djokovic right now and I see the Serbian in the quarters.

David Goffin and Marin Cilic are likely to face off in round 3 for what will possibly decide a spot in the World Tour Finals depending on how far Goffin goes after that. The Basel champion Cilic has been in better form but I have Goffin winning as he should be fresher. Cilic could also fall to Ivo Karlovic in round 2, presuming Karlovic beats Dusan Lajovic. The Croatian was a semifinalist in Vienna and would love to knock off his countryman. Goffin plays the winner of Nicolas Mahut/Martin Klizan, likely Klizan in round 2.

Stan Wawrinka could face Zverev, who knocked him off in Basel, presuming Zverev beats Isner, and David Ferrer, who left Vienna with an injury that caused him to withdrawal in the semifinals. Wawrinka will face J.L. Struff or Illya Marchenko in round 2. I have Wawrinka over Zverev, because despite their Basel meeting, Wawrinka is the better player.

Richard Gasquet may not be healthy, but he should defeat a struggling Steve Johnson or Guido Pella. Dominic Thiem will face the Sock/Kohlschreiber winner, he’s trying to lock down a spot in London so I have him beating Sock and Gasquet to reach the quarters.

Milos Raonic isn’t playing well, and I have him falling to Pablo Carreno Busta in round 2. This is a weak section of the draw as Pablo Cuevas gets a bye and faces the Benoit Paire/Paolo Lorenzi winner. I have Lorenzi vs. Carreno Busta in a surprising third rounder, as Cuevas and Paire are both struggling. PCB should prevail.

Jo-Wilfried Tsonga, the finalist in Vienna, and Kei Nishikori, the finalist in Basel, look set to face off in round 3. Nishikori will face Viktor Troicki or Adrian Mannarino, while Tsonga will face Albert Ramos or Stephane Robert in round 2. Ramos and Troicki both come off of quarterfinals in Vienna, but Nishikori and Tsonga should win out, with Nishikori reaching the quarters.

Andy Murray has won his last three tournaments and should have no trouble against Fernando Verdasco or Robin Haase. Verdasco has lost four in a row and is in awful form, so Murray should beat the qualifier Haase, and then could face Lucas Pouille in round 3, presuming Pouille beats Feliciano Lopez or Pierre-Hugues Herbert. Since Lopez just beat Pouille though, I have Murray over the serve and volleyer Lopez in round 3.

Tomas Berdych will face Roberto Bautista Agut or Gilles Simon in round 3 with a London spot on the line, presuming he can break his three match losing streak and earn a win over Joao Sousa or Andreas Seppi. RBA faces the Simon/Benneteau winner in round 2, he’s been on a recent skid as well, so Simon over Berdych is my pick in round 3.

Karlovic needs to knock off Cilic and Goffin but he could reach the quarterfinals and trouble Djokovic at that stage. Simon I favor to reach the quarters over the seeds Roberto Bautista Agut, and Tomas Berdych. The home Frenchman should perform well in Paris.

The four ranked favorites should prevail in the quarters unless Thiem or Simon shake things up.

The world #1 and #2 look set to face off despite Wawrinka and Nishikori’s best efforts.

Normally I’d pick Djokovic, but Murray is playing so well right now I think he’ll get an elusive win.