If You Don’t Like American Tennis, You’ll Hate The @CMPChallenger in Charlottesville

If You Don’t Like American Tennis, You’ll Hate The @CMPChallenger in Charlottesville
Steve Fogleman, Tennis Atlantic

If there’s such a thing as a home court advantage, it might belong to Denis Kudla more than the entire contingent of UVA tennis players, past and present, in the main draw. It certainly looks like Kudla’s Castle after a breezy 6-1, 6-2, 56 minute victory on Tuesday over Tommy Paul at the USTA $50,000 Charlottesville Men’s Pro Tennis Challenger at the Boar’s Head resort in Virginia.

“Maybe a little bit of a home court advantage (at the Boar’s Head resort). I’ve come here and practiced a lot, so I’ve really gotten used to these courts. I love playing here. I’ve told a lot of people and a lot of people know, this is probably the best court for me in the world. Maybe on grass courts too, but on this court, I play my best tennis. I am so comfortable. I am really happy here.”

Kudla draws UVA recruit Carl Soderlund from Stockholm in the 2nd round.

“The UVA Freshman is really good and I look forward to the challenge,” he said.

US main draw direct entry players at the Challenger are an astounding 12-5, which doesn’t sound astounding until you figure that four of the losses were to OTHER American players. Noah Rubin, last year’s USTA Australian Open Wild Card Challenge champ, was the only direct entry American to lose a match against a non-American, so the record is more like 12-1. That’s Solid Gold. We’re used to all these American ATP 250s that hand out Wild Cards like funny money to local celebrities and they all get destroyed in the first round.

Austin Krajicek defeated Great Britain’s Edmund Corrie, 7-6(3), 6-4 and Brian Baker took out Tim Van Reithoven of the Netherlands, 6-4, 6-2 in less than an hour.

Broady defeated US qualifier J.C. Aragone, 6-1, 3-6, 6-3, and was kind enough to venture down a dangerous trail with us in discussing the US Presidential election and Brexit’s impact on British players. 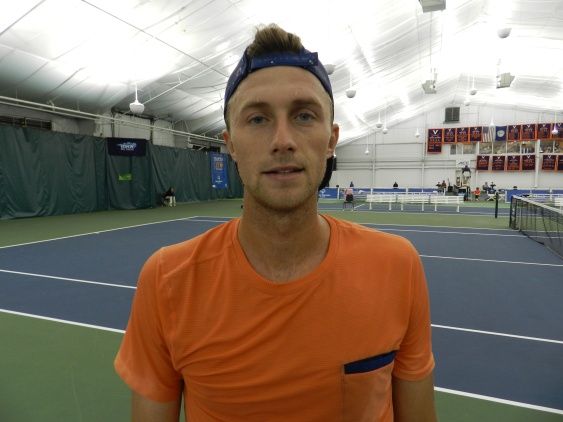 Peter Polansky showed up late for his match against 2016 USTA Australian Open Wild Card champion Noah Rubin and dealt the Long Island native an early setback in his hopes of repeating the feat in 2017. Since the USTA format allows for the best two scores in the three round event, Rubin can still repeat with strong showings in Knoxville and Champaign.

Bjorn Fratangelo dug himself a huge first set hole before battling back for a straight sets win over Belgium’s Joris De Loore, 7-6(3), 6-2. He spoke with us after the match.

Later, Michael Mmoh won a convincing match over compatriot Dennis Novikov 6-3, 6-2. Mmoh has roots in the Washington area, and is pleased to advance here in Charlottesville.

Tim Smyczek: What can you say about him? Love the guy, but at this point, he’s just knocking off young, often-American talent and he needs to go be a great coach. In this case, Tim’s victim was Thai “Favorite” Son Kwiatkowski of UVA, 6-4, 2-6, 6-3.

In the ONLY singles match not involving at least one American yesterday, Switzerland’s Henri Laaksonen defeated qualifier Yuki Bhambri, 6-3, 7-6(3).