He says he doesn’t care about the whole Wild Card Challenge, but world #276 Reilly Opelka got a huge early jump on the Australian Open wild card awarded by the USTA with a nail-biting 6-4, 2-6, 7-6(5) third set tiebreak over Ruben Bemelmans to win the Charlottesville Men’s Pro Tennis Challenger in Charlottesville, Virginia on Sunday afternoon.

“You definitely played like you deserved to win,” Opelka said of opponent Ruben Bemelmans”. “I felt like I got lucky in the breaker,” he continued. “I want to thank Diego Moyano, my coach for the week. This tournament’s awesome. We play Challengers all over and this is my favorite one,” he said. Since it’s first pro title, it’s natural for him to feel that way. 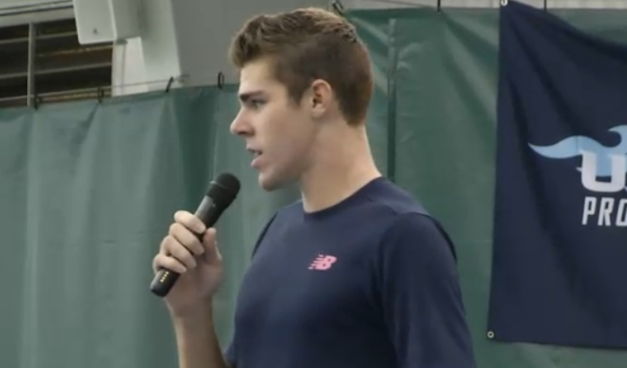 Throughout the week, Opelka was a wrecking crew against his fellow Americans, knocking out Sekou Bangoura, Michael Mmoh, Mackenzie McDonald and 2012 Charlottesville champion Denis Kudla.

Reilly Opelka Stencils the W Before a First Round Match in Charlottesville (Photo: TennisAtlantic.com)

Bemelmans also helped Opelka keep other Americans down in the hunt for the wild card. He beat Bjorn Fratangelo and Tim Smyczek before facing Switzerland’s Henri Laaksonen in the semifinal.

The men now move on to Knoxville before concluding the wild card campaign in Champaign, Illinois. The best two results from the three-tiered event will earn one American player direct entry into the main draw in Melbourne next January.