Want to Win a Date With @GenieBouchard? You’re Too Late.

Who’s that with John Goehrke?

Everyone’s favorite North American tennis superstar has gone all Taylor Swift on us, going on a date with a mere mortal. It all happened because she lost a Superbowl bet. Seriously, Genie, you bet on the Falcons? I think she secretly wanted this date or she had no idea about Patriots Coach Bill Belichick’s penchant to win at any cost.

Here’s the publicists take on it:

“After losing a Super Bowl bet on Twitter, Genie Bouchard, who bet on the Atlanta Falcons to win, agreed to go on a date with a random fan. She made good on her bet by taking the fan, John Goehrke, a student at the University of Missouri, to the Brooklyn Nets vs. Milwaukee Bucks game at Barclays Center. The two enjoyed dinner in the venue’s Calvin Klein Courtside Club, and took in game from courtside seats. They even participated in a t-shirt toss!”

Even the t-shirt toss? In my country, that means you must get engaged.

And from a look at the pic below, it appears Lady Gaga was dancing on the roof of the Barclays Center last night. A sign from above, Genie. Time to settle down. 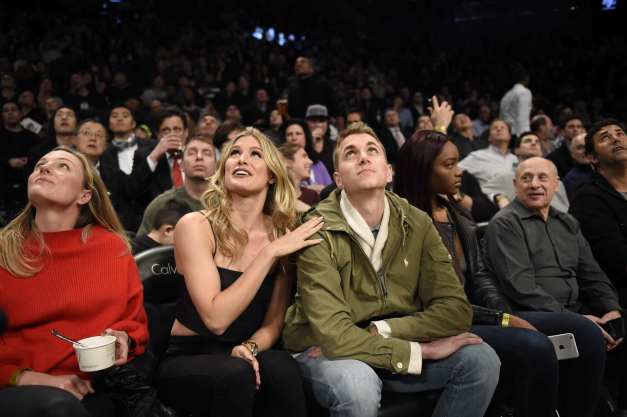 Look! It’s Lady Gaga! Or is it just a pigeon?