Youth served notice at the 2017 Volvo Car Open when two 19-year olds square off for their first WTA Tour victory of their career.

Russian Daria Kasatkina will improve on her world ranking of 42 with the successful run she’s had at Charleston. She will be facing fellow teen Jelena Ostapenko of Latvian who will also gain spots from her current world ranking of 66.

First up on Stadium court was Laura Siegemund of Germany as she faced Kasatkina. Siegemund was having a career tournament making it to the semis at 29-years old before going down to Kasatkina 3-6, 6-1, 6-2 in a two-hour-and-eighteen-minute match.

Siegemund was the tournament’s seed-slayer when she downed No. 3 Venus Williams, No. 15 Lucie Safarova, and No. 8 Anastasija Sevastova before losing to Kasatkina in the semi-finals.

Against Siegemund, Kasatkina played steady tennis even though she dropped the first set. Siegemund successfully used the drop shot the entire tournament but went to the well too many times before the patient Kasatkina marched through the second and third sets.

“So it was a tough, tough match,” Kasatkina said in post match press. “It was more about mental than about the game.” 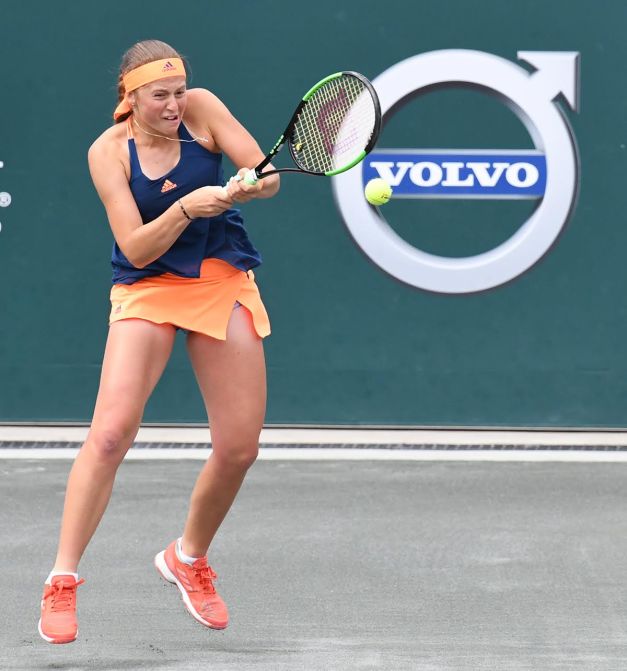 Eleventh seed 35-year old Mirjana Lucic-Baroni squared off with the second teenager of the day in 19-year old Latvian Jelena Ostapenko, who dismissed No. 5 Caroline Wozniacki in the quarterfinals on Friday.

Lucic-Baroni pushed the teen sensation losing a close match 3-6, 7-5, 6-4 that took a little over two-hours.

Ostapenko had a chance to close out the match in two sets when she was up 5-3 in the second but emotions crept in opening the door for Lucic-Baroni. “I actually was quite emotional in the second set when I was 5-3 up and I couldn’t finish the set, but she liked when I was emotional,” Ostapenko said. “It kind of gave her confidence ’til then.”

Ostapenko collected herself in the third set by keeping her emotions in check gunning it out with the ever battling Lucic-Baroni and finally taking the third set 6-4.

Kasatkina and Ostapenko will face each other at 1 p.m.