INDIAN WELLS, Calif. (March 23, 2018) – If recent results are any indication, 16-year-old Caty McNally is going to be playing more and more ITF and USTA Pro Circuit events and less junior tournaments in 2018.

But the Cincinnati native has her sights and focus set on the upcoming 51st annual Adidas Easter Bowl, the USTA Spring National Championships, which kicks off on Saturday at the Indian Wells Tennis Garden in the Coachella Valley, where all eyes were on the recently completed BNP Paribas Open.

The 18s is an ITF Grade B1 and USTA Level 1 event. It is a closed event meaning only players from the United States are eligible to play. The tournament will include the nation’s top 12-and-under 14s, 16s and 18s players. The 12s and 14s will start play this Saturday, March 24, with the finals taking place on Thursday, March 22. The 16s and 18s begin play on Monday, with the 16s finals on Saturday, March 31, and the 18s finals on Easter Sunday, April 1. 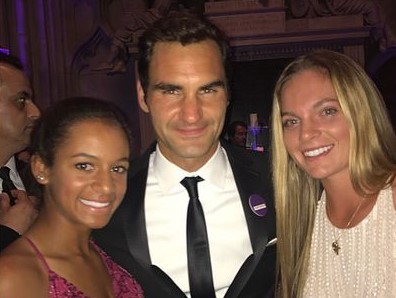 McNally, who lost in the quarterfinals of singles last April at the Easter Bowl to eventual winner Claire Liu, is currently the No. 30-ranked player in the ITF Junior World rankings. She has quickly proven to be one of the toughest doubles players on the USTA Futures Pro Circuit, capturing back-to-back doubles titles at $15,000-level pro events at Orlando and Tampa over the past few weeks, as well as another $15,000 event in Guadaloupe in January.

McNally and the 2017 No. 1-ranked junior player in the world Whitney Osuigwe won the Adidas Easter Bowl ITF 18s doubles title last year, and went on to play in the Wimbledon Championship Junior final. It was the second consecutive year McNally had advanced to the final. In December, McNally and Osuigwe cemented their claim as one of the world’s top junior doubles team by winning the prestigious Eddie Herr International.

McNally won the Orlando Pro Circuit doubles title with her former U.S. Junior Fed Cup teammate Osuigwe and won Tampa with Natasha Subhash. It was the fourth pro title of McNally’s career as she also won the Hilton Head Island event back in October with British partner Emily Appleton.

Alexa Noel is expected to be top-seeded in the ITF 18s event and is currently ranked No 11 in the ITF Junior world rankings. Noel is 15 and from Summit, N.J. She will be followed by Margaryta Bilokin, who is ranked No. 27 in the world, and is originally from the Ukraine but trains at the IMG Academy in Bradenton, Fla. Following McNally will be top American girls’ Subhash (Fairfax, Va.), Lea Ma (Dix Hills, N.Y.), Hailey Baptiste (Washington, D.C.), Hurricane Tyra Black (Boca Raton, Fla.), Gabriella Price (Montebello, N.Y.), Katie Volynets (Walnut Creek, Calif.), and last year’s USTA National Hardcourt Girls’ 16s singles and doubles champion Angelica Blake (Boca Raton, Fla.), who also won the 16s Easter Bowl in 2016.

On the boys’ side, Southern California’s Tristan Boyer (Altadena, Calif.) is the top-seeded player coming in with an ITF world ranking of No. 13 and is followed by No. 14 Drew Baird (Holly Springs, N.C.), No. 15 Andrew Fenty (Washington, D.C.) and No. No. 39 Trey Hilderbrand (San Antonio).

The 16s wild cards for the girls are Carson Tanguilig, Danielle Benabraham, Gianna Pielet and Nika Vesley while the boys include Andrew Chang, Jameson Corsillo and Alex Lin.

The Adidas Easter Bowl Player Party will take place at IWTG on Sunday, at the same time as the Team USA Coaches Reception and Awards presented by the USTA, honoring some of the best coaches and programs in tennis today. Among the honorees this year will be:

The iconic junior tournament started by Seena Hamilton in 1968 and now led by Tournament Chairman Lornie Kuhle. Long considered the Super Bowl of junior tennis, the Adidas Easter Bowl’s status has now been raised to a new level by being played at what is arguably the finest tennis facility in the world, the Indian Wells Tennis Garden. Few other junior tennis tournaments in the United States possesses the same rich history as the Adidas Easter Bowl.  The tournament was started in New York City and has been played in Florida, Arizona and California.

To keep up with all the Adidas Easter Bowl news, visit the website at www.easterbowl.com and check out the tournament on Facebook (www.facebook.com/EasterBowl) and Twitter (@easterbowl).

In addition to live streaming the Adidas Easter Bowl again this year, the tournament has a new and improved mobile app, which can be found at Match Tennis Apphttp://www.matchtennisapp.com. The live stream commentating duties are being provided by the popular Southern California tennis commentator Marcus Tennis. Check www.easterbowl.comto watch the live stream and for all Easter Bowl news, results and schedules.