The Marshal Plan: Phil Hinkle is in the Zone at the @CincyTennis Fan Zone 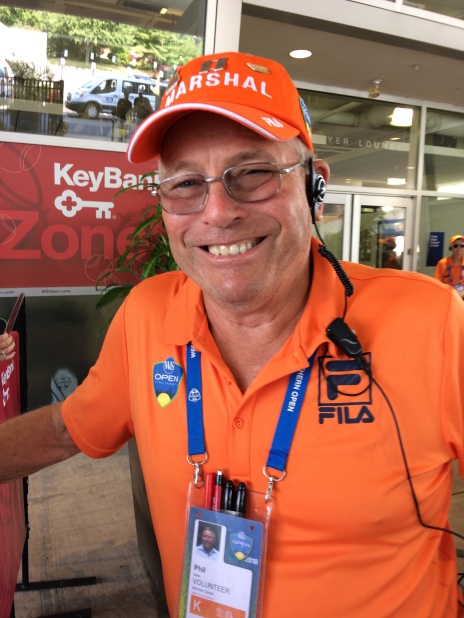 The Marshal Plan: Phil Hinkle is in the Zone at the @CincyTennis Fan Zone
Steve Fogleman, Tennis Atlantic
There is nothing quite like the Fan Zone at the Western & Southern Open. There’s only one way in and one way out of the facility for the players and each day finds new autograph seekers huddling in wait to meet their favorites. Even obscure players get shouted down by the all-ages throng. It’s thrilling for fans and I would imagine, players too. I overheard an adult say, “What if they did this for the Cubs?”
The answer: it’ll never happen but it would be amazing. Imagine if your favorite MLB team sauntered through the main entrance to Wrigley Field, with their bat bags in tow and still found time to be in your selfie. What if you could walk around the stadium and watch all of your favorite sluggers taking batting practice simultaneously on a dozen baseball diamonds? It’s not going to happen, unless the Cubs trade somebody really good to the Western & Southern Open for Phil Hinkle.
For there is one man who I think of when I think of the Fan Zone, and that is Phil Hinkle, a local volunteer from neighboring Indian Hill. He’s a Western & Southern Open Marshal who mans the front lines. His job is part traffic cop, part security guard and part ambassador. Hinkle’s been at his post for 33 years. At 76, his resume runs deep for the job, all the way back to ball boy at the old Tri-State Championships in the 1950s. The Tri-State Championships were the precursor of the Western & Southern Open as the Cincinnati Masters event. And despite holding one of the toughest jobs in Southwestern Ohio in the month of August, he still manages to play tennis a couple of times a week. 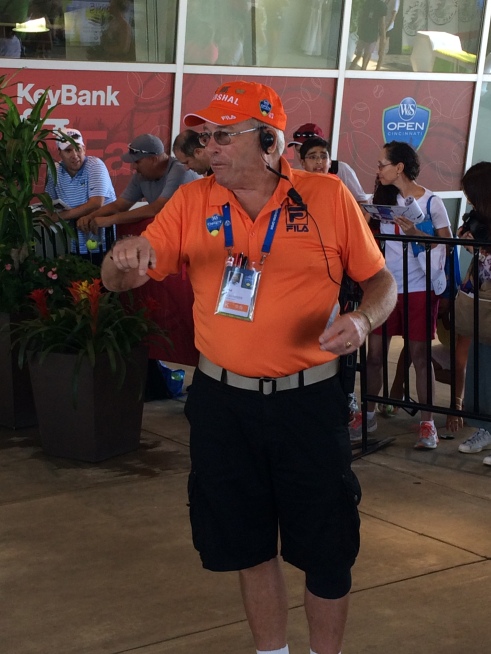 Here’s how most of his day works: There is a walkway around Center Court. There is a gate which is opened and closed as players walk into the player’s locker rooms and dining facilities, so that they are able to come and go without a mob scene. The iron gates don’t roll. They’re also heavy and they need to be opened and closed every few minutes. In a stroke of genius, Hinkle and the other Marshals deputized the kids in the front row behind the gate to do the heavy lifting.
“This is a critical spot and you have to have it under control, and I figured out how to do it by myself,” he told me from the Fan Zone on Tuesday.
With a little help from the fans, of course. “We get people standing behind the fence in the front row and I say, ‘You’re going to be the motors when I say close the gates and when you push the gate up, you are going to be in front row center.’ Then the player goes by, and I say ‘open the gates’. So I can stand here and talk to you while they do their work. I’ve turned around before and the gates were closed and I didn’t see why. Then Federer would be standing in the parking lot. Just now, Tsitsipas came by and when he left, I said ‘Open the gates!’ and the fans said ‘Don’t do that’ and I turned around and Simona Halep was coming in. They help you.”
Everyone complies because it means they’re in the front row for the autograph opportunity. It’s the way he does his job that makes the Western & Southern Open such a friendly, less-pushy place compared to other tournaments of its size. He’ll give you a holler and tell you to keep the walkway clear, as he’s done to me many times in the five years I’ve covered the event. But he does it with a smile on his face. And Hinkle keeps a bunch of Sharpies in his credential holder for fans to borrow in a pinch. Tell me the last security guy who loaned you a Sharpie at the Cubs game. 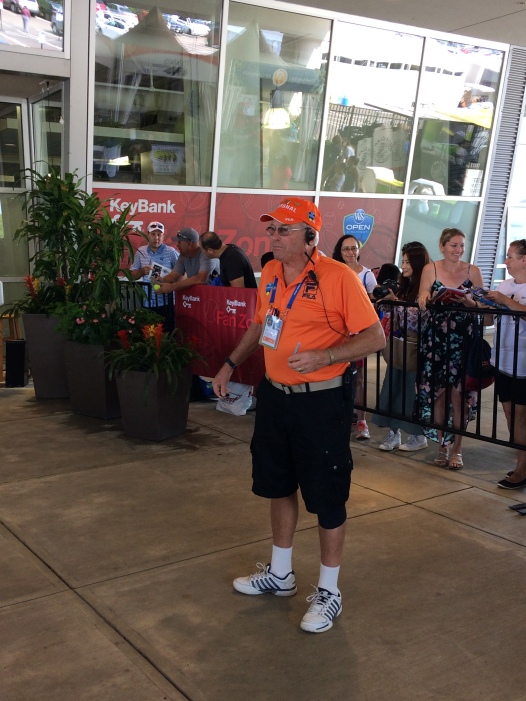 Peak times? “It gets crazy anytime someone comes in that the fans know,” he said. Especially if it’s a Roger or a Serena, early in the morning.”
“Ma’am, behind the rail, please,” he shouted as we continued to chat.
And he doesn’t get any advance notice of who’s about to arrive at the tournament despite all the technology. “If they did, then it would be tough for us to keep a straight face. People say ‘Do you know when so-and-so is coming’, and I say no and if I did know, I couldn’t tell you,” he says with his signature smile.
33 years will breed some familiarity. “You think the players don’t know you, but they do know you,” Hinkle told me. “Especially if you’ve been doing it for a long time.”
“After Michael Chang retired and was getting married, one of his friends came by and made a video of people wishing him well and I said a few words. When I saw him when he returned to (Cincinnati to) coach Nishikori, (Chang) said, ‘I was watching the tape and I remembered you!’  I said, ‘it’s been a long time since you’ve been here’ and he said,
but I remember you!” 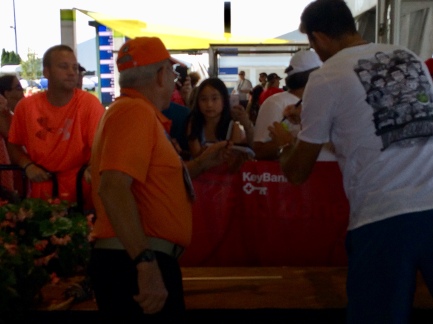 “And then there was the time Andre Agassi was playing in the finals (in 1995),” he continued. His coach (Brad Gilbert) was with him. They had to park in the back because he had a Lincoln instead of a Mercedes. It was a hot day and Agassi gets out and says ‘This is the hottest it’s even been here.’
And Gilbert said, ‘No, it was hotter the year I won (1989)’, and Agassi said, ‘No, this is the hottest it’s ever been.’ And I’m thinking ‘who cares about two degrees? It’s hotter than Hades. So then Gilbert turns to me and says, ‘Tell him it was hotter the year I won!’ And he remembered me from years earlier.”
Hinkle admits he’s “the old guy” at the Western & Southern Open. “By tournament age, not by physical age,” he added.
He has no plans to give up his post at the Fan Zone anytime soon. “I’m gonna do it as long as my legs hold out, which is maybe anytime,” he jokes. He’s standing on his feet for nine or more hours everyday, plus another hour or two for meetings and preparation.
Finally, I asked him to recount his favorite player-fan moment of interaction. 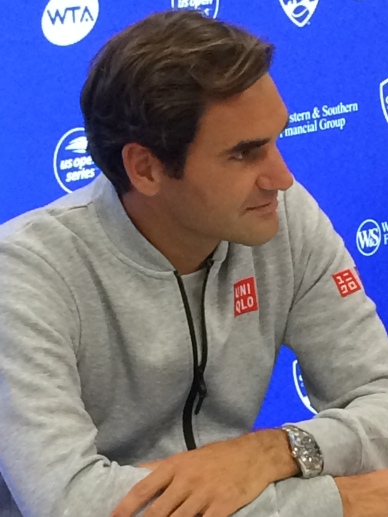 “When Federer won (in 2014), he signed everyone’s autographs. Now we don’t allow anything in the parking lot because kids will see players signing and they’ll run between cars. After the final, I said ‘Roger, there’s one autograph I want you to give in the parking lot.’
“This lady in a wheelchair had come up from Lima, Peru and she had Lou Gehrig’s (Disease) and she’d like to get an autograph. (Federer) went over there and put his hand on her shoulder and bent down and said something to her. What he said, I don’t know. Her companion, who was pushing the wheelchair, was crying. I’m thinking about crying right now. Roger talked to her and then took the hat off her head and signed a legible Roger Federer on the hat, gave it back to her, patted her on the shoulder and said ‘Good luck’. For all I know, she was dead within three months. She couldn’t speak but her lips were quivering. I’ll never forget it.”
I won’t forget that story either, as Hinkle’s eyes welled up as he recounted the moment. And I won’t forget the work of dedicated volunteers like Phil Hinkle. He’s the glue that holds the Fan Zone together and one of the reasons why the Western & Southern Open is easily America’s friendliest big sporting event.