Stan the Man Struggles But Advances, Tsitsipas Stunned by Medvedev 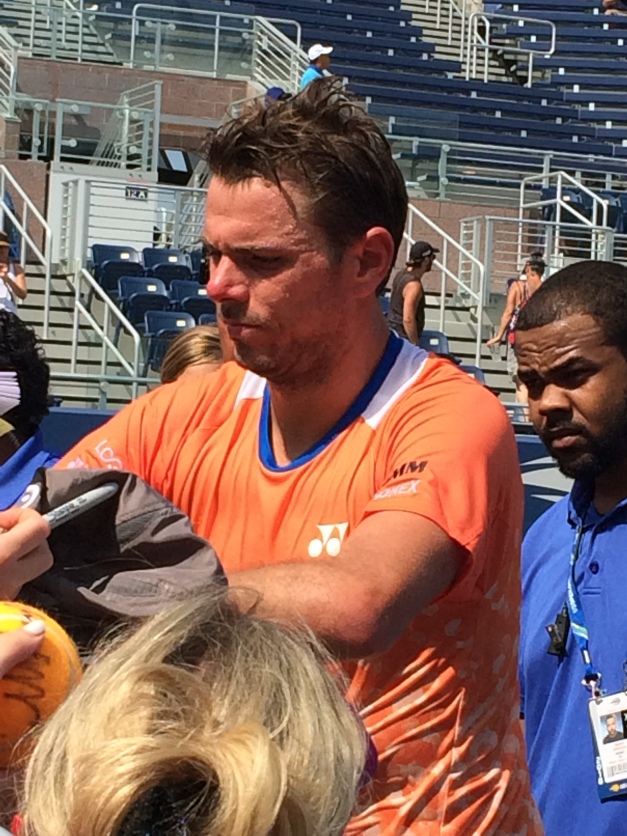 Stan Wawrinka came out to an appreciative crowd at the US Open Grandstand this afternoon, and after the win, he stuck around in the oppressive conditions to greet the fans. Ugo Humbert, in the US Open main draw for the first time, was vanquished by the Man, 7-6(5), 4-6, 6-3,7-5.

“Yeah, it was tough conditions today,” he said after the match and a cooldown.  “Quite hot and humid last few days, already yesterday. But a battle to play a player that never played before (Humbert), young player. He’s been playing really well this summer, recently: qualifier, won a match, lefty, doesn’t give you a lot of rhythm. Playing a great game.”

Milos Raonic will be his next test on Friday.  “Big match, that’s for sure,” he said. “He’s playing well. Also he had some injuries, had some struggles. But I think he’s playing great tennis. He’s always been a tough opponent to play. Serving big, putting a lot of pressure, going for it. Don’t get a lot of chance to break him, but you need to take them.”

One of this summer’s hottest stars on the ATP Tour was bested by another streaking young ATP star as Daniil Medvedev proved the better player than Stefanos Tsitsipas. Medvedev advanced to the third round with a 6-4, 6-3, 4-6, 6-3 win. After the match, Tsitsipas had a lot to say about the heat and made a prediction on our 2018 US Open Men’s Singles champ.

“Well, yeah, oh, my God, it was so tough to play outside there,” he said.  “I could feel it every single time I went to serve/return. I could feel all this heat coming into my face. I don’t know if I’m red. I didn’t check myself on the mirror, but I feel like my face is, like, burning right now.”

“Well, you know, yeah, it’s mental, because you don’t have fresh air to breathe. You breathe this heat that’s coming, the moisture that’s in the air. So you feel like you’re empty. You’re not breathing out, breathing in, breathing out, so it feels really awkward to be playing like this. There is no fresh air. It’s like you feel like you’re playing in the desert, really. I don’t know if the desert is that humid, but it feels — mentally, yeah, I believe that the one that’s gonna win this tournament is going to be the one that mentally is prepared for long matches in the heat and knows that he’s gonna have to overcome the difficulties of the heat. So that’s the guy who’s gonna win the tournament.”

“Most possibly I believe it’s Nadal. Yeah, he played well last year, so I believe he can do it well this year, as well.”

You heard it here first, folks.