Stephens Survives Scare from Kalinina; Venus Gets by Giorgi, Does Her Part For a Friday Williams Sisters Showdown

Sloane Stephens didn’t look happy when she took the court on Arthur Ashe Stadium at noon today for her second round US Open match in New York. That look got worse as she dropped four of the first five games to Anhelina Kalinina. After a bathroom break to start the second set, Stephens play improved somewhat, and she tenuously won the second set 7-5. In the third, Kalinina’s play fell flat and Stephens was clearly in the groove for the 4-6, 7-5, 6-2 match that lasted two hours and forty five minutes on the blazing courts.

Stephens plays Vika Azarenka in the third round on Friday. 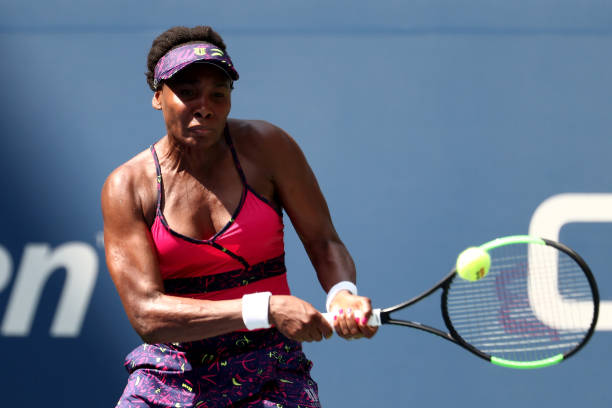 Meanwhile, Venus Williams was battling Camila Giorgi and was able to finish off the Italian in two sets to get off of Armstrong so she can prepare for her third round match ton Friday, likely against little sister Serena. The final was 6-4, 7-5.

After the match, Venus waxed poetic about playing on the new stadium. “It’s great to play out here on Louis Armstrong, the court is named after a legend,” she said. “I’m really pumped to win here today against an inspired opponent.”

She doesn’t check the draw, but she didn’t have to, since it’s all the buzz in New York.

“I don’t know, you gotta play who you have to play. When you’re in the draw, all you think about is winning your match.”

That said, she recalled her last meeting with Serena at the 2017 Australian Open. “Last time, it was two on one, so at least this time it’ll be fair,” she said.