Aliaksandra Sasnovich: Fighting for a Grand Slam Title in New York and a Melting Pot in Minsk 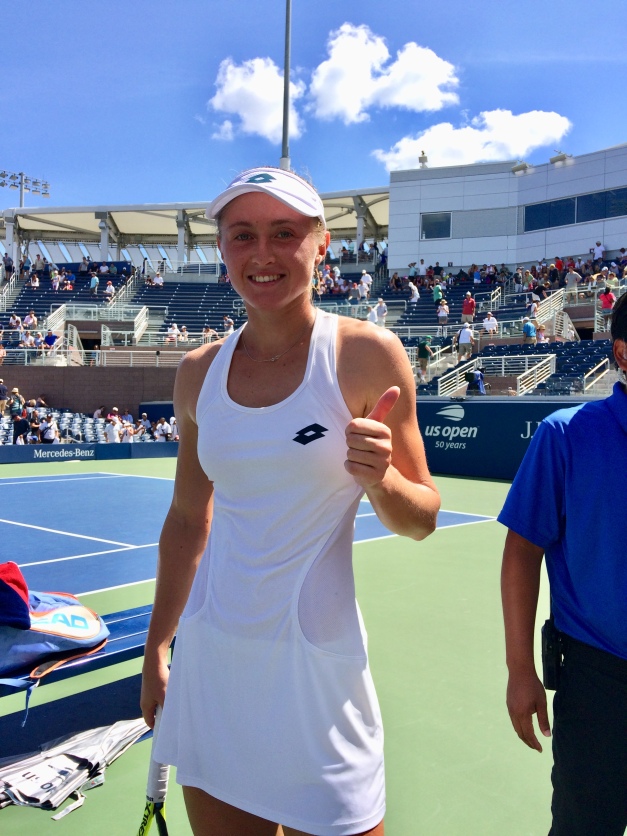 Aliaksandra Sasnovich wants you to know that reaching the third round of the US Open is not her biggest win yet. “I don’t think so,” the 24-year-old from Belarus said today after her match. “I have a lot of good matches. This is one of them but it’s not my biggest and I think my biggest is in front of me.” Sasnovich was speaking about her win over Daria Kasatkina of Russia, 6-2, 7-6(3) win on the Grandstand.

And it didn’t feel as easy as the score suggests. “It was 1:34 but it feels like we played three hours,” she said, “because a lot of points, a lot of you have to move, and Dasha’s a really good player. She’s 11 in the world.  It was difficult for my mentality so I’m really happy with this win. It was difficult conditions for both. Probably I want to win more today. ”

She credited a change in her style for causing havoc to Kasatkina today.

“My concentration was very good today.”

She won’t dwell on the victory for a minute.

What is it about Belarus and three third rounders at the US Open?

“Of course, three girls top 32, so I’m really proud of the girls for our country, but I think after Fed Cup, when they played the finals, quarterfinals, and semifinals in Minsk, a lot of people were coming to see our match and some of them, they didn’t know what is tennis, and when they saw tennis in life, they’d probably seen it on TV, in life, it was good popularization and they took their child on the court and they wanted to play them professional. They want my country to be more improving in tennis, and they think we can have more good players.”

“I wish luck on all the other Belarusian players that we can go on to the next round for popularization of tennis in our country.”

Next up is Naomi Osaka, another tough ask for any player on the tour and one that can’t be forgotten for coming back from a 0-5 deficit in the second set.

“Yeah, it was a good match, it was good conditions (Tokyo 2016), I remember we played inside. It was very humid. I lost 6-3 the first set, and I was 5-0 up in the second set and I lost the set, but it was two years ago. It was so, so long time ago. She was different, I was different.”

And here’s a twist: She’s a fondue junkie who wants a Melting Pot in Minsk.

“I really love the Melting Pot, in America. Fondue. I want to open one and it’s no joke. I really wanted to open the fondue in my country, but it was a small secret. Now it’s not secret anymore. But I want to open the cheese fondue and chocolate fondue, with milk chocolate and white chocolate with strawberry, banana, fruits, some marshmallows.”

She’ll have a day to relax before preparing for Osaka. In the downtime, she’ll eat and be a tourist.

“So I really like to eat. Probably I will go to Central Park today or the Empire State Building. My coach will give me one or two hours. I will probably go to cinema to see a movie. To relax, to be out of the tennis for evening and night.”

She’s happy to hear that the scorching conditions are about to let up.

“It’s better for us, for all the players. because it’s better to play when it’s 25 or 26, degrees than when it’s 35. It feels like 41. So I’m happy for all the girls who are going to play in that condition.”

She’s one win away from tying her best grand slam result at Wimbledon this year. It’s been a pleasure to watch this player progress through the years and now I’ve got to take care of my Fondue craving as soon as I get out of Queens.