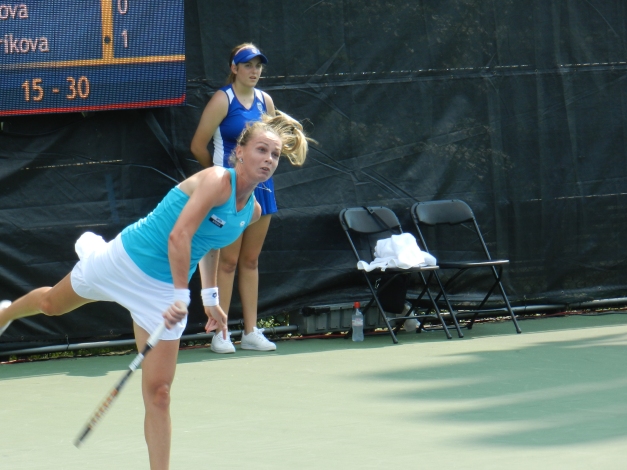 I knew little about Magdalena Rybarikova before the 2012 CitiOpen, but her play has been so consistently strong that it’s hard not to take notice of her. She agreed to speak with me after her quarterfinal victory over Jana Cepelova on Thursday evening. The 23-year old lives and trains at the Slovakian National Tennis Center in Bratislava. For the next month, she’ll be camped out in a players hotel somewhere in North America. First stop: Washington.

What’s worse: the heat or the humidity in Washington?

It’s amazing, because I came from Azerbaijan, in Baku, where it was the same. Very humid, very hot. When the sun is shining all the time, it ‘s tough to play.

Is it bitter-sweet to defeat a fellow Slovakian in Jana Cepelova today?

It’s always a tough match. Everybody’s expecting that I will win the match because I’m better ranked and older, but she’s an upcoming player. She’s my friend and she’s moving very well.

Do you think you’ve got a real chance to win another title here in DC on Saturday night?

I’m not thinking like that. I go  match by match, step by step. We will see. Tomorrow will be another very tough match. I arrived here very late and had to play every day.

Who travels with you? Do you bring your family?

My coach (Mojmir Mihal). It costs too much to bring your family overseas. In Europe, yes. Maybe to New York in a few weeks, because I’ll be here for one month.

What do you think of the City of Washington?

I think it’s the best city in the States. I like it here. It’s very clean. I would like to see more.

Does the US hard court season suit your game?

I like to play in the States. I love the hard courts and it’s good for my game.

I read that you carry a lucky charm with you, a toy bear.

To be honest, now I have another one. I have a new one. I carry it in my bag. I have to always have it with me. A duck.