Denis Kudla started off the men’s quarterfinals action winning 6-4 6-1 over Jarmere Jenkins, in a match that was far more competitive than the scoreline alone would indicate. The speedy and powerful Jenkins put together a nice first set highlight reel of winners combining his top notch mobility with his inside out power from the baseline. However, Kudla would remain calm under the pressure, executing his gameplan well, moving forward to win points when the opportunity arose, defending great from the baseline, serving well and keeping his error count to a minimum. Jenkins had a lot of flash, but his errors would outweigh his highlights when he produced them, and he just wasn’t consistent enough today to get ahead of the top seed. Kudla was notably icing his wrist/forearm area after the match but didn’t appear to be injured per say. 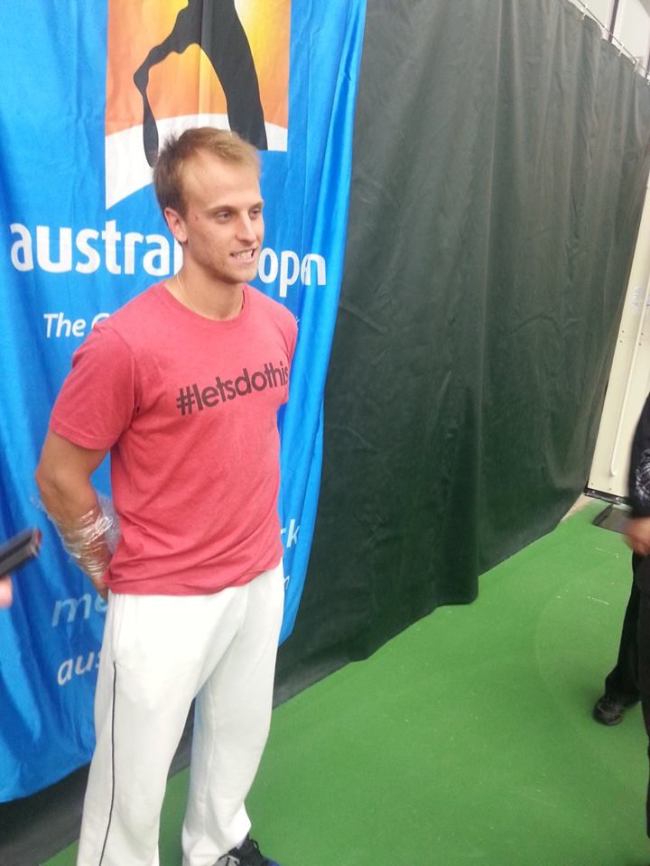 Steve Johnson showed signs of rust, recovering from a prior leg injury, but was the superior player against Bjorn Fratangelo winning that match by a score of 6-2 7-6. Johnson simply adapted better to the court surface and hammered away at Bjorn, consistently holding his serve, hitting a few nice winners when called they were needed, and generally keeping in control of the match. Though Fratangelo worked hard in the second set to get it to a tiebreak, Johnson had control of it, and the final match point was of exceptional quality as both players traded a variety of strokes, coming to the net and back again, while covering the entire length of court, with Johnson eventually sealing the match with a backhand stab winner off his back foot.

Tennys Sandgren easily dispatched a frustrated Austin Krajicek 6-3 6-0 in the most lopsided match of the day, Sandgren is in red hot form right now and is letting his hair grow out to try to keep the mojo going, The Sandgren-Kudla semifinal match promises to be one to watch tomorrow.

In the final match of the day, Chase Buchanan was the steady recipient of a Rhyne Williams epic meltdown, winning the match by a score of 4-6 7-6 6-2, after being down a  break 5-6 in set 2. Buchanan did play well but the match was totally on Williams racquet as he started with a slight edge in quality, earning a break and serving things out in the first, and edging his way along in the second set, eventually earning himself a break after both players had squandered break point chances early and midway in the set. Williams was calm and collected, going about his business, up until failing to serve out the match at 6-4 6-5 up, Buchanan kept the ball in play while Williams made too many errors with both his serve and groundstrokes, that, along with a couple of controversial line calls, handed Buchanan the break back and a life line, causing Williams to let loose, smashing his racquet and beginning a self beratement campaign filled with non-FCC approved expletives that would last the rest of the match. After choking away the 2nd set tiebreak, starting 0-3 down, coming back on a few points after Buchanan errors but eventually losing it, Williams would slam and crumple his racquet, sitting in disbelief on the bench  during the set rest break. In the 3rd he would really let go, beginning to argue with the umpire and just cave, while Buchanan, looking almost identical in the same Adidas outfit and backwards cap, would just carry on his steady level of play, letting the victory come to him and coasting to it with his quality serve.  Buchanan vs. Johnson in the semifinals tomorrow should be another quality match.