Vicky Duval’s left knee held up today long enough to survive top seed Shelby Rogers to advance to tomorrow’s USTA Australian Open Wild Card Playoff Final at Lifetime Athletic in Norcross, Georgia. Rogers did her best to move Duval all over the court to exploit the health advantage, but Duval’s accuracy allowed her to hold off the South Carolinian by a score of 6-4, 7-5. Rogers was out of the facility and on her way to pack for her long flight to New Zealand after a very quick shower.

#168 Duval will face Sachia Vickery in tomorrow’s final after a long and pushing match against Grace Min. It was not a pretty one to watch, as both players simply tried to wear each other down with long but unimpressive rallies. “We played and trained together so much, we really know each other’s games well”, Vickery admitted after the 4-6, 7-6, 6-4 grind. 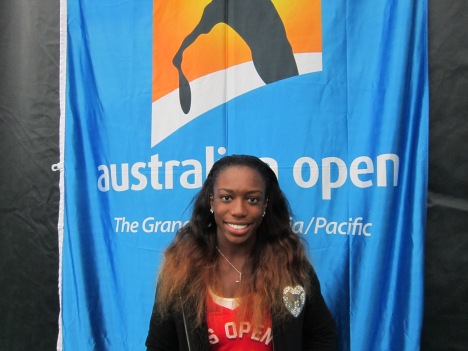 Both finalists have reached the second round of a major before, and one will earn a direct chance to do it again. Vickery won their only pro meeting 6-0, 6-4 in Midland qualifying earlier this year.  Vickery says she would expect a closer result tomorrow. Colette Lewis and others on twitter quickly and correctly pointed out that these players are hardly strangers, with several previous encounters as juniors.

Since no one else will probably say it, I will. I think it is a testament to the growth of tennis that two African-American young women will meet for this title tomorrow. Even with the success of Sloane Stephens, Stephens and the Williams have been the exception rather than the rule in American tennis. This is a significant achievement for pro tennis and bodes well for the future interest in the women’s game in the United States.

Tomorrow’s final will begin at 1:00 p.m. I want to personally apologize for the twitter meltdown. This place is a wi-fi desert. Erik Gudris of @ATNTennis is using T-Mobile and doesn’t seem to be having the same problems the rest of us are. If you’re not following him yet, it  be a good idea. In fact, @RickRoswell has three phones here with separate carriers and couldn’t get a single one to work. This is what twitter was like in 1995, if twitter had been around in 1995.