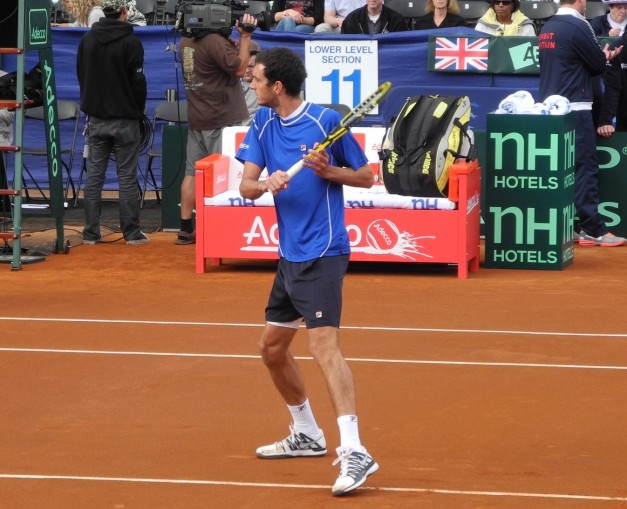 James Ward is British Number 2 with a current ranking of 108 in the world. He has been chosen by team GB coach Leon Smith to participate in the Davis Cup tie next weekend, when GB take on USA in round 1 of the World Group (again!) Momentum for James has been building since he achieved what is arguably his best-ever career win against Sam Querrey in the Davis Cup Quarter Final in early 2014.

His ranking has almost halved since then, and he has enjoyed some stellar performances on both the ATP and Challenger tour in the interim. Under the guidance of Darren Tandy, James will be looking to push further up the rankings where he is guaranteed ATP main draw tennis week-in, week-out. The manner in which he is starting to push the very top in the men’s game suggests a further breakthrough is not far away. In addition, his rankings progression and Davis Cup impact act as inspiration to fellow British professional players who are ranked below him. An understated ambassador for British Tennis, James Ward is beginning to make his mark on the world stage.

Darren Tandy took time out while James was playing in Dubai to talk to me, and once again I would like to thank him for his time and for agreeing to chat with me for Tennis Atlantic.

(Glenys) James spent some time with Andy Murray in Miami during the off season – How do you feel this influenced/helped James?

(Darren) “James and Andy have become very good friends and Andy is very supportive in helping James to climb up the rankings. There are always things that successful people give onto a person if you are around them and this no doubt helps James in his goals to move up the rankings in world tennis with spending time with one of the great players in the men’s game over the last 10 years.”

It’s nice seeing James on the cusp of breaking into the top 100, what strategy have you in place to break that barrier?

“We don’t see any barrier there if he plays his potential often enough the ranking will sort itself out and what he is ranked at any time will be a result of the level he has been playing up to that given point in time.”

Seeing James taking sets (and in the case of the John Isner match, exhibition matches!) off players ranked in the top 50 must fill you with enormous pride, how confident are you that he can reach that level in the rankings himself?

“I’m very confident he has the ability to be ranked well inside the top 50 he must play at the level often enough and that will happen as a result.”

What do you regard as James best ever match and why?

“From matches I have seen the best match he played was to qualify at French Open last year and from a national pride point of view he has played one or two great five set Davis Cup matches in recent years.”

As a purely biased Brit, his performance against Sam Querrey in last years Davis Cup tie was amazing. Do you remind him of this with this years tie coming up?

“Yes, this was an important win at the time and shows what he is capable of as Sam is a quality player often in his career ranked inside the top 30 and able to win tour events and he is the same year born as James. James loves to play DC for GB and needs no motivation to get up to play. Results like that give him confidence what he can do on the big stage.”

Does James realise he has such a following within the Tennis supporters and how does he feel about this?

“I’m not sure some players realise how many people follow their results and lives and care about how they are going although as a coach I try to remind him of this to appreciate and respect it and try to entertain and humour us all at times. The fans would love to play the sport at an elite level also and is what the pros sometimes need to recognise in my opinion.”

What is yours (and James) goal for this season?

“Goals and targets are kept private to the player although one goal for me as a coach is to give the player as often as possible the information to give the chance to play their potential in every match. This I think gives the player the best chance to attain his or her own personal goals.”

Thank you for an amazing interview Darren, and I look forward to seeing James play live when I attend in person the Davis Cup tie against the USA.  I will be yelling very loudly, and probably end up hoarse!-Glenys

One comment on “@Glenysfurness interviews Darren Tandy, coach of @JamesWardtennis”