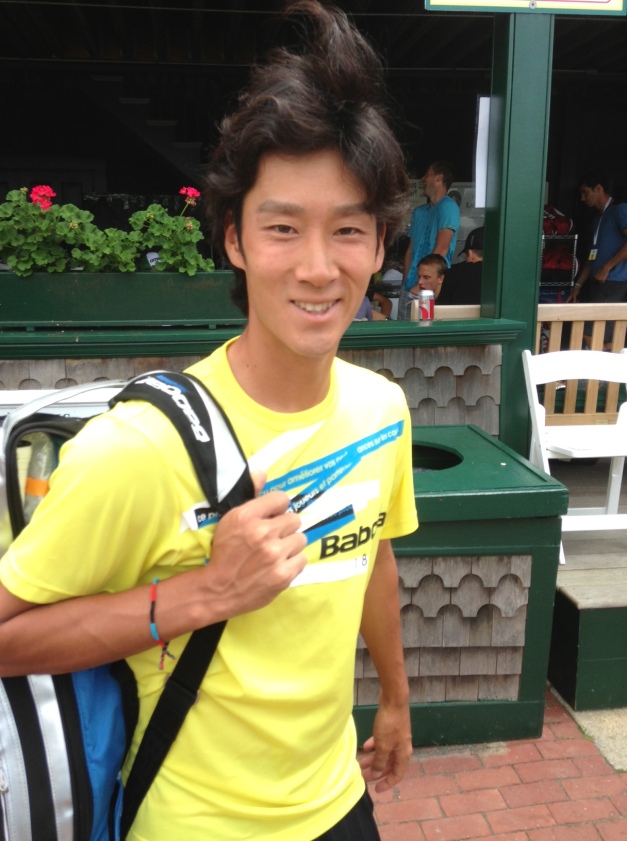 There was double Japanese joy as Yuichi Sugita and Yasutaka Uchiyama qualified for the main draw of the 7th ATP Malaysian Open. The tournament is in its seventh edition and is headlined this year by David Ferrer and Feliciano Lopez.

Top seed Sugita didn’t drop a set during three qualifying matches to qualify for the main draw. After beating Thailand’s Congsup Congcar in the first round 6-2, 6-2 he faced German doubles specialist Andre Begemann. The 31-year-old is currently ranked 55thin the doubles and was playing in his first singles qualifying draw since Geneva last May. The lack of singles play was a factor as Sugita eased past the German, dropping just three games. His biggest test was in the final against Italy’s Matteo Donati. Since reaching the semifinals at the Granby Challenger in July, Donati has suffered a series of early tournament exits. Serving for the first set at 5-4, Sugita endured a marathon game, which consisted of five set points and four break points, before taking the opening set. The Japanese player also had to recover from a 0-2 deficit in the second set to fight his way into the main draw, winning 6-4, 7-6 (2). Sugita’s successful qualifying campaign followed his triumph in Thailand at the start of September. He defeated Argentina’s Marco Trungelliti to claim his fourth challenger title.

Uchiyama was two points from going out in the final round of qualifying before edging his way past 2nd seed Luca Vanni. The 7th seed defeated Malaysian wild card Christian Oliver Lee and compatriot Takao Suzuki before his encounter with Vanni. During the lengthy encounter, which lasted two hours and nineteen minutes, the world No. 226 came back from a set down to win 3-6, 7-6 (5), 7-5. Uchiyama will play in the main draw of an ATP tournament for the first time in his career. The 23-year-old has claimed three Future titles in 2015 and reached the final of the Lexington Challenger in August.

Besides the duo of wins for Japan, Mischa Zverev continued his recent upsurge in form by producing three straight set victories in his qualifying campaign. Prior to Malaysia, the world No.248 qualified for the main draw of the Moselle Open in Metz. He upset Spanish world No.60 Pablo Carreno Busta in the first round before losing to eventual champion Jo-Wilfried Tsonga. During qualifying in Kuala Lumpur, the German got a boost when third seed Yoshihito Nishioka crashed out in the first round of his quarter. The shock result meant that he faced fellow German Philipp Petzschner in the second round. During the closely contested match, Zverev edged his way into the last round 7-6 (6), 6-4. In the final round, he faced New Zealand’s Artem Sitak, who upset Italian sixth seed Thomas Fabbiano. Russian-born Sitak hasn’t won a singles title since 2012 and concentrates on the doubles circuit where he is currently ranked inside the top 50. Zverev endured another close match before winning in an almost identical score-line to his second round triumph – 6-4, 7-6 (5).

Competing the four qualifiers is Polish world No. 159 Michał Przysiężny. The 31-year-old encountered his toughest match at the start of the draw against Indonesia’s Christopher Rungkat. Rungkat reached the final of the US Open boys doubles competition in 2008. Battling against a player ranked almost 300 places below him, Przysiezny took the match 6-4, 7-6 (2). After his testing first round match, the Pole charged into the main draw by dropping 3 games in his last two matches of qualifying. In the second round, he beat Wild card Ahmed Deedat Abdul Razak 6-1,6-1, followed by another emphatic win against 8th seed Daniel Nguyen (6-0,6-1).