HILTON HEAD ISLAND, S.C. – Doubles domination clinched the 2015 USTA Tennis On Campus Fall Invitational for the University of Georgia as the Bulldogs defeated Boston College, 24-15, on Sunday under cloudy skies on the final day of play at the Palmetto Dunes Tennis Center.

The Bulldogs went 18-3 in the three doubles sets for the difference in the match, even though they lost both the men’s and women’s singles matches by 6-3 scores. By making the final, both teams received an automatic bid into the 2016 Tennis On Campus National Championships set for April 14-16 in Cary, N.C.

Georgia opened up a commanding 12-3 lead heading into singles as the women’s doubles team of Sheridan Schuster and Stephanie Grodecki won their doubles match, 6-1, and the men’s doubles team of Brian Brandt and Graham McNerney followed that with a 6-2 win over their Eagles opponents. 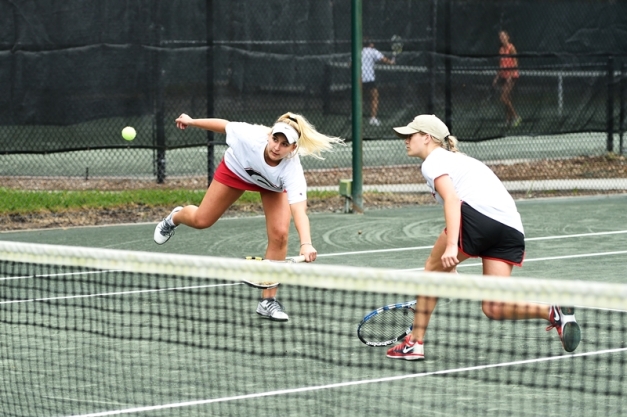 It was the first time since the event’s inception in 2010 that a USTA Southern Section team took home the title as the University of Alabama won the first Fall Invitational six years ago.

“Our new freshman were the difference, and our doubles play,” captain McNerney said. “Every line did great. It feels amazing. It’s awesome to win the Fall Invitational for the first time.”

The Eagles took a 12-6 advantage in singles play as Alena Frye and Colin Crawford won 6-3 matches pulling Boston College within three (18-15) heading into the final match, mixed doubles. From there McNerney and Marcinkowski pounded out a 6-0 to put an exclamation point on the undefeated weekend.

“It was a tough match,” Boston College’s captain Jake Sheehan said. “Georgia is a good team. It was a really good weekend and something to be proud of. We have a lot of positives to take home and bring back to Boston. This shows that we can compete on the big stage and we look forward to the Sectionals next weekend and then to Nationals.”

In the third-place match, Central Florida defeated Virginia Tech, 30-18. It was the first time Central Florida had played the event since 2012, when they also finished third.

“It was a great weekend for us,” said UCF junior captain Kleber Fukamizu. “We’ve been playing together for a couple of years now and we have really good chemistry.”