Veterans vs. Teens: Game On at @VolvoCarOpen Semifinals

From 16 seeds down to one as another day of upsets continued on the clay courts at the Volvo Car Open on Day 5.

Windy conditions again hampered play as two teenagers and two veterans emerged to make it into the semi-finals on Saturday. Eleventh seed Mirjana Lucic-Baroni, the 35-year old veteran, continues to have a resurgence in her career as she overcame local hometown favorite Shelby Rogers 6-7(7), 6-1, 6-1. Rogers grew up playing on the same courts she battled Lucic-Baroni in the quarterfinals.

Rogers played even with Lucic-Baroni as she took the first set in a tiebreak. “I thought I played really well in the first set, was super patient, kind of weathering the storm,” Rogers said. In post match press, Rogers said she pulled an abdominal muscle the night before against Naomi Osaka.

Lucic-Baroni took over in the second and third sets getting stronger as the match went on. “I really didn’t focus much on her,” Lucic-Baroni said. “I stepped it up a lot and I got really mad at myself after losing that set because I felt like I was there.”

The upset of the day happened when 19-year old Latvian Jelena Ostapenko, ranked 66 in the World, took out the highest seed left, No. 5 Caroline Wozniacki 6-2, 6-4. Ostapenko, making her first trip to Charleston had 40 winners against 26 unforced errors.

“Yeah, I was trying to no make so many unforced errors and still stay aggressive,” Ostapenko said. “That’s the way I play usually and yeah, I think I served pretty well today.”

Germany’s Laura Siegemund continued her hot streak at Charleston by taking out Latvian Anastasija Sevastova 6-2, 6-4 in difficult conditions catapulting her into the semis. 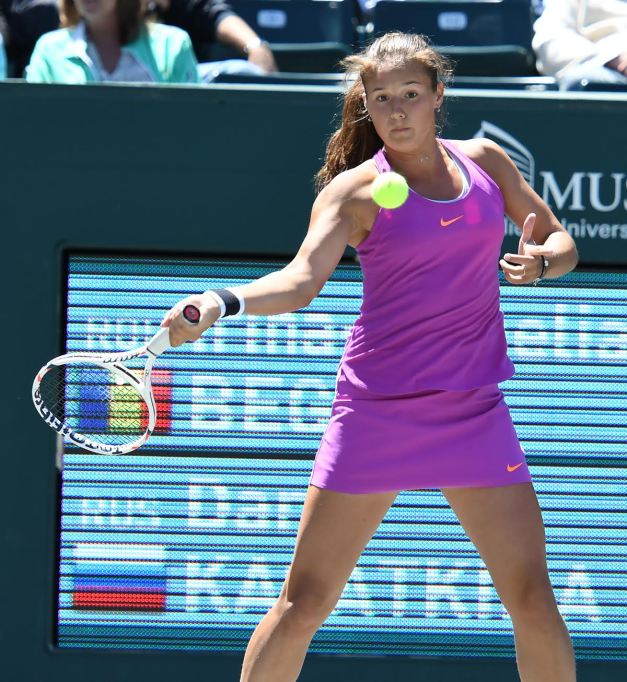 Semi-final action beings on Stadium court at 1 p.m. where Kasatkina will face Siegmund followed by Lucic-Baroni and Ostapenko.