Exclusive Interview: @KikiMladenovic Perseveres in Heat of Battle @CitiOpen; @SabineLisicki Back to Winning Ways in Washington

Kiki Mladenovic was struggling throughout her match with the heat yesterday in a brutal 3-set win against Tatjana Maria at the Citi Open in Washington. In the end, she easily showed that she’s earned the title of prime contender against top seed Simona Halep, who was resting from her win more for than 24 hours after Mladenovic advanced. She made time for an exclusive interview with Tennis Atlantic after the match.

There was some talk in the media this week (and every year) about the fact that the women play in the afternoon and the men follow later during what are inevitably  cooler temperatures with more fans in the stands. So what about the idea that the WTA players get the worst tee-times at Citi Open, in the high heat of the D.C.-in-August day? Would she like to play a little later in the afternoon? Mladenovic put it in perspective. 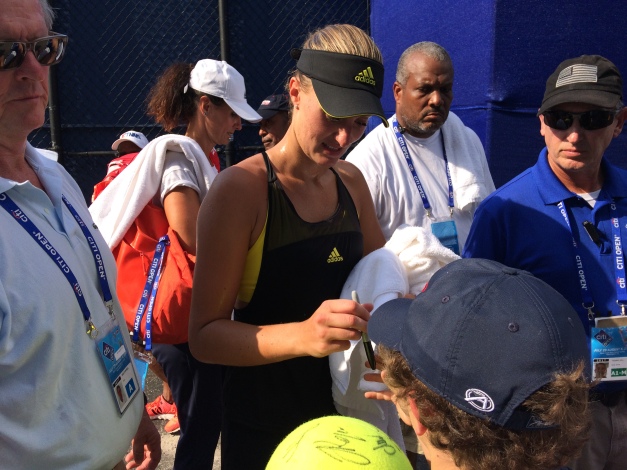 “I would love to. I wish” she said, “but I cannot complain. The men and the women struggle the same way. They played really late last night. We were in bed watching, them, the men, last night so you get some compromises, I guess. Hopefully, it gets easier with the upcoming scheduling in the coming days.”

“My motto hasn’t changed. Lots of work, like everybody, I guess. But I believe in the process and the journey. I’m giving it all everyday. I’m trying to find all the details I can to improve and be a better player each day.”

“The biggest difference would be my physical condition. I think I’ve improved a lot in my movement and my strength.”

She noted that she’s “very happy” with the 2017 season thus far.

Mladenovic plays Canada’s Bianca Andreescu tomorrow on Grandstand 2, which hardly seems fitting for the putative #1 seed of the tournament until Simona Halep was denied a wild card to Stanford. Either way, Mladenovic is content to earn everything she achieves, here and beyond. 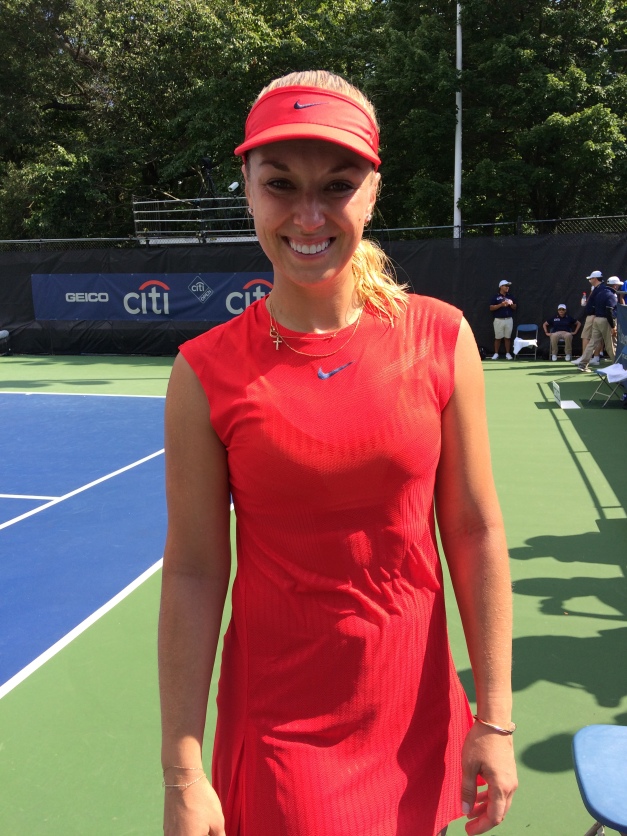 Sabine Lisicki is indeed back to her winning ways. After an absence from the tour due to injury, Lisicki edged past plucky Valentini Grammatikopoulou 7-6, 7-6 at Citi Open in Washington today. Lisicki wasn’t thrilled with her play, but she’ll take the win and advance to the second round against Aryna Sabalenka tomorrow. “It was my first hard court match since last year. Lots of things I need to improve on,” she told Citi Open Radio immediately after the match. Lisicki was sidelined for the first half of the season with shoulder problems. No matter what her ranking, the US fans adore Lisicki and the feeling was clearly mutual today after the match.