The WTA tour heads to Dubai for Dubai Duty Free Tennis Championships. With 470 points available for the winner, who will take the rankings climb this week?
After being launched as a men’s only tournament in 1993, it became a joint event in 2001 and one of the best stays on the tour. Justine Henin has the tournament record with four titles followed by Venus Williams with three. Other former champions include WTA superstars Lindsay Davenport, Elena Dementieva, Martina Hingis, Petra Kvitova, Amélie Mauresmo and Caroline Wozniacki.

Maria Sharapova and Agnieszka Radwanska were both scheduled to compete but withdrew prior to the tournament. 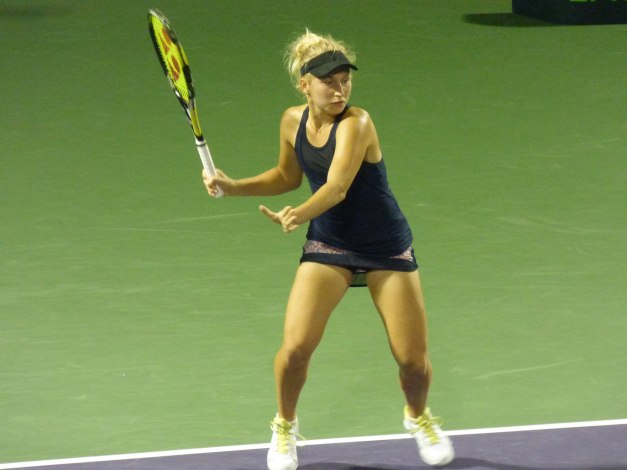 Out of the all the opening round matches this one stands out the most. Ivanovic is coming in off the back of a disappointing loss to Roberta Vinci in St Petersburg whilst Gavrilova is playing for the first time since a good run in Melbourne.

The Aussie has won their only previous match in Rome last year coming through in three sets, so she has proven she is capable of upsetting the former world number one.

This one could go three sets and feature plenty of momentum shifts. Definitely one to look out for when the tournament kicks off.

Coming off yet another good run in St Petersburg, Bencic is one of the players to watch this year as she continues her climb towards the top of the game.

However the young Swiss star could be slightly fatigued in Dubai and faces a tough opener against the more experienced Jankovic.

Both play a more counter punching game and although Bencic is currently the better player, Jankovic always has the potential to reel back to the years where she made number one in the world.

The fifth seed leads the head to head 2-1 with them tied 1-1 on a hard court. Who will win the fourth meeting?

With Petkovic vs Giorgi you have a classic style clash with the power of the Italian against the counter punching of the German.

Giorgi holds a 3-1 head to head lead over Petkovic despite being ranked 17 places below, including a victory in Dubai two years a go. The world number 23 won their last meeting however in Cincinnati last year.

Petkovic’s bad form and Giorgi’s general up and down style of play could make for a messy encounter but it is still one to watch as it could go either way.

Halep will be looking to turn her season around after a poor start that saw her exit the Australian Open in the first round. The defending champion will be the tournament favourite, but there are some tricky roadblocks ahead. After an opening round Bye the Romanian will begin her tournament against the winner of Ivanovic and Gavrilova. It is a tough match for the out of form Halep that could see another early exit.

Svetlana Kuznetsova is the other seed in this section and has a tough opener of her own against Julia Goerges. Barbora Strycova will likely wait the winner in round two as the Czech has drawn a qualifier in her opening round. Kuznetsova vs Strycova could be a lengthy and dramatic affair that could go either way.

Spain is well represented in the draw with their top two players both being seeded. Suarez Navarro, being the third seed, will receive an opening round BYE before meeting the winner of Caroline Garcia vs Anna Schmiedlova. Two different propositions with Garcia being the aggressor and Schmiedlova being a more defensive minded player. The Frenchwoman will be full of confidence after her Fed Cup exploits.

Bencic will be another player that comes into Dubai in good form after a good run in St Petersburg, but she faces a tough first rounder against Jankovic. It won’t get much easier in round two wither with Petkovic or Giorgi waiting in the wings. It’s a tough draw for the Swiss and with fatigue possibly a factor, don’t be surprised to see an upset.

The Czech took a wildcard into the tournament in order to gain some momentum after her ranking fell to ninth in the world. The two time Grand Slam champion has the extra time to prepare due to her seeding and will therefore meet the winner of Madison Brengle vs Ekaterina Makarova in round two. Makarova could be a very tricky test in a battle of the lefties.

Vinci, like Bencic, will come into Dubai off the back of a good run in St Petersburg. The Italian faces a qualifier in round one before meeting compatriot and former doubles partner Sara Errani in round two. Who will win the battle of the former doubles champions?

Muguruza has also not enjoyed the best start to 2015 and has struggled to find her best form whilst struggling with a foot injury. The Spaniard will open her tournament in round two against either a qualifier or Elina Svitolina in round two. A match against the Ukrainian will be an interesting one between two of the tour’s best young talents.

Like Kvitova, Karolina Pliskova took a wildcard into the event and might fancy her chances at taking the title. The Czech will have a big serving battle against Coco Vandeweghe before meeting the winner of Kristina Mladenovic vs Lesia Tsurenko.